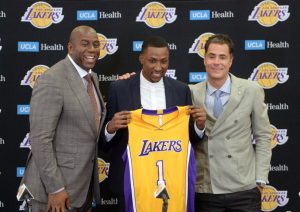 The Lakers remained intrigued with Russell’s skills as a point guard as he further developed his outside shot and showed flashes of his superior passing. The Lakers still remained skeptical, however, of Russell’s various other qualities regarding his leadership and work ethic. So while the Lakers stayed convinced that Russell would further develop with more experience and maturity, they harbored questions on whether he could become the franchise’s new face following the Kobe Bryant era.

Under that framework, Johnson had higher priorities as the Lakers’ president of basketball operations. Find a way to trade either of the burdensome contracts in veterans Timofey Mozgov (three years, $48 million) or Luol Deng (three years, $54 million). Collect draft picks. Stay aggressive in trades (Paul George) without squandering their No. 2 pick and second-year forward Brandon Ingram. Acquire players with positional versatility, an outside shot and a defensive presence, so the Lakers can adapt to the modern NBA.

After four teams offered various trade proposals involving Russell, Johnson finally heard one that fulfilled his goals. The Brooklyn Nets would accept Mozgov and Russell in exchange for center Brook Lopez and the No. 27 pick.

“They got a great player in D’Angelo and we got what we wanted,” Johnson said.

Afterwards, Lakers general manager Rob Pelinka downplayed whether Lonzo Ball’s availability in the NBA draft made Russell expendable. But Johnson suggested as such, depicting Ball as a pass-first player with unassuming leadership qualities and Russell as a player that lacked both qualities. Johnson harbored no regrets both on parting ways with Russell and his honest commentary.

“I’m not one of them dudes,” Johnson said. “When I say, ‘Bye,’ that’s it. I can’t get caught in emotions. That’s not who I am. We moved and kept moving. After that trade, we went onto the next thing. That’s who I am. Both Rob [Pelinka] and I put our heads down and keep moving.”

The Lakers sure did.

They used that No. 27 draft pick on Utah junior forward Kyle Kuzma, who eventually won the Las Vegas Summer League Finals MVP because of his positional versatility, emerging outside shot and sharp cutting. They signed free-agent guard Kentavious Caldwell-Pope to a one-year, $18 million deal, a player that can enhance the team’s perimeter defense and offset the outside shooting that Russell and Nick Young usually provided.

The Lakers have held firm on staying deliberate in free agency. But with 13 players signed to their regular-season roster, they plan to add at least another player at the backup point guard spot. That will not necessarily compensate for Russell’s departure. But the Lakers hope to add a more veteran presence.

“When you guys leave, we’re going to be talking about point guards,” Johnson said. “We have to get this done. Then Luke [Walton] will know who he will have and he can start doing his thing in August and get ready for September.”

That process will not include Russell, a player the Lakers willingly traded for the purpose of fulfilling other objectives they considered more important.

Lakers anticipate filling out roster in “next week or two”