And while nothing is expected to dramatically move forward relative to any L.A. relocation when owners and league officials gather in the Valley of the Sun Sunday through Wednesday, you can be sure Los Angeles will be a hot topic of discussion.

Here are the updates, and it’s a mixed bag to be sure:

With the Raiders and Chargers teaming up to build a stadium together in Carson pending developments in their current cities, it looks like the City of Oakland and the County of Alameda are taking notice – and action.

In fact, a deal that looked dead just a few months ago to develop the land where the Raiders currently play in Oakland now looks very much alive.

Oakland’s City Council will vote on Friday on new exclusive negotiating agreement between the city, county and New City Development LLC, the group led by Floyd Kephart pushing the Coliseum City project that includes new stadiums for the Raiders and Oakland Athletics.

Meanwhile, the County of Alameda will vote on the same agreement next Tuesday.

This represents a significant step forward, as the the city of Oakland and county of Alameda jointly own the land but for years have been at odds with each other. The fact they are potentially willing to work with one another could expedite the $1.5 billion, 200-acre stadium aspect of the project.

The sense I get talking to city and county leaders is they are ready to move fast on this.

If the city and county agree on the ENA, Kephart can finally approach the Raiders with assurances the city and county are on board with land use. That doesn’t mean the Raiders are assured of getting their desired 55,000-seat stadium, and at some point Kephart must address financing and reveal his investors, but by next Tuesday a huge obstacle might be cleared.

While the task force assigned by Mayor Kevin Faulconer has settled on the Mission Valley site to examine a new stadium for the Chargers – and seems confident a plan can be put in place by May – there remains deep concern within the Chargers offices relative to the ancillary financing mechanisms likely in place and the lengthy process involved in getting a mixed-use development entitled.

That means Carson is very much in play as a long-range option. Perhaps as soon as January 1, when teams are allowed to file for relocation.

The Chargers simply have no time to wait on a prolonged process getting Mission Valley entitled – with or without the St. Louis Rams involvement in Inglewood.

There is still time – albeit running out – and it will be fascinating to see what the task force presents to the mayor in May.

The sense I get talking to insiders on both sides is San Diego is in quite the pickle getting something done in time to extend the Chargers stay beyond next year. There is hope on the city’s side, but the Chargers are skeptical.

St. Louis’ hopes of keeping the Rams were dealt a significant setback Thursday when the Missouri Senate passed a measure forbidding Gov. Jay Nixon from extending bonds for a new NFL stadium without a vote. The measure now moves to the Missouri House.

Considering Gov. Nixon’s two-man task force recommended that as much as $350 million of the $1 billion needed for a new, open-air stadium come from the bond extension – and the seemingly slim chance Missouri leaders and voters will now support such a bond in a vote – the challenge will be coming up with new financing, should the measure be ratified by the House.

If not, Rams owner Stan Kroenke could essentially walk to Inglewood, where he is proposing a privately financed football stadium on the site of the old Hollywood Park race track. 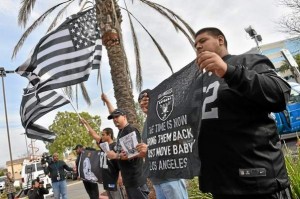 One day after the San Diego Chargers announced they were staying put at Qualcomm Stadium for the 2015 season, I received a text from a high-level NFL executive.

Without getting into too many details, the text reiterated an interesting bit of information my source had passed along earlier in the week.

Two teams – the Chargers and the Oakland Raiders – will be sharing a stadium in Los Angeles by the 2016 season.

Even with the Chargers not exercising their annual out-clause at outdated Qualcomm Stadium, my source strongly indicated Los Angeles will soon have not one, but two teams in Los Angeles.

The information jives with recent reports that neither the St. Louis Rams, Raiders or Chargers will be re-locating to Los Angeles in time for the 2015 season – including ESPN’s Adam Schefter’s report on Saturday that commissioner Roger Goodell told all three teams there will be no move to L.A. for 2015.

I am hearing that it was actually the teams advising the commissioner they were not moving at the end of this season, but one way or another the NFL will not be in Los Angeles next season.

That also lines up with recent developments in St. Louis indicating momentum building for the Rams staying put in the Gateway City.

The Rams lease with the Edward Jones Dome can be terminated at the end of this season, but according to reports out of St. Louis local leaders are growing more and more confident they will come up with a suitable plan to build the Rams a new stadium to keep them there long-term.

As for the Raiders and Rams, there futures seem much more tenuous.

Both face similar issues building new stadiums in their current cities, and while the Chargers seem to be going all in in 2015 to finally get a stadium deal done in San Diego, there is little to suggest city leaders are ready to step up to the plate.

If not, the Chargers, could be eying Los Angeles again at this time next year.

The Raiders lease at Oakland-Alameda County Coliseum is set to expire at the end of this season, and while their preference is to remain in the Bay Area there is nothing to indicate a viable is forthcoming on a stadium deal with city, county and state leaders.

But that doesn’t mean the NFL isn’t coming back to Los Angeles.

In fact, some people within the league are adamant it will happen by 2016 and I am hearing rumblings the preferred long-range plan is for two teams to play in a downtown stadium built by the NFL and AEG, which owns and operates Staples Center.