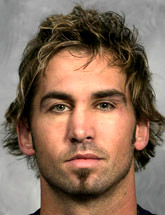 Ducks defenseman Shane Hnidy skated with his teammates at 10 a.m. today, then was told to pack his bags.
END_OF_DOCUMENT_TOKEN_TO_BE_REPLACED