Skip to primary content
San Bernardino’s Isiah Ferrera was named the lower weight MVP of the Mountain Valley League and was one of the Cardinals’ four individual wrestlers to win a league title in their respective weight classes. 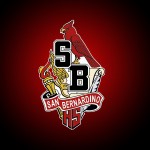