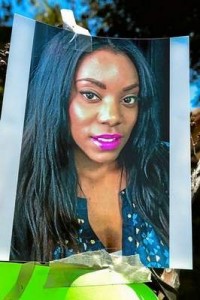 MONROVIA >> Detectives arrested a suspect Thursday in the slaying of a 31-year-old Monrovia woman found dead inside her car in June, officials said.
Investigators arrested Jose Roberto Turner, 47, about 8:30 a.m., on suspicion of the murder of Lajoya McCoy, according to Los Angeles County sheriff’s officials and county booking records.
McCoy was reported missing June 15, one day before officials found her body inside her car, which was parked in the 200 block of West Cypress Avenue, Los Angeles County sheriff’s officials said at the time.
“He is the ex-boyfriend of Lajoya McCoy,” Deputy Ryan Rouzan of the Sheriff’s Information Bureau said in a written statement.
No further details were released regarding the investigation into the alleged slaying of the mother of two.
McCoy’s official cause of death has not been released due to a “security hold” placed on the case by sheriff’s investigators, coroner’s officials said. The security hold, which bars coroner’s officials from discussing their findings, remained in effect Thursday.
Turner was being held without bail pending his initial court appearance, records show.
McCoy’s body appeared to have been left in her Toyota Camry for a period of time, though officials have declined to say exactly when McCoy is believed to have been killed. Detectives initially noted signs of a struggle at McCoy’s apartment, but declined to give further detail.
Anyone with information is asked to contact the Sheriff’s Homicide Bureau at 323-890-5500. Tips may also be submitted anonymously to L.A. Regional Crime Stoppers at 800-222-8477.