SAN GABRIEL VALLEY >> A spherical object spotted hovering silently over the San Gabriel Valley this week had residents gazing skyward and wondering what they were witnessing.
The object appeared in the sky over the San Gabriel Valley Monday morning.
One video, posted by YouTube user Julian Lopez, appears to show a Los Angeles County Sheriff’s Department helicopter circling around the object for an inspection around 7 a.m. over West Covina.
“Well, my friends, there’s a UFO over the San Gabriel Valley,” the videographer said.
“A helicopter is circling it,” he added. “It looks like a big eyeball.”
While the object resembled a large balloon, “There’s nothing holding it down, though. That’s the thing,” Lopez.
Lopez said he had just finished washing his car when he spotted the object out of the corner of his eye.
The sphere was metallic gray in color and made no noise, he said.
“It was just weird because it didn’t budge,” Lopez said. The witnesses went into his house to tell his 6-year-old son to come take a look, as well as to retrieve his cell phone to record video.
The man and his son watched as two helicopters flew in close proximity to the object. At least one of them circled around it before leaving the area.
After sitting motionless for several minutes, the object slowly began moving toward the west, Lopez said. He had to stop recording in order to prepare his kids for school and go to work.
But another witnesses in Arcadia spotted and photographed the object several hours later, about 10 miles to the northwest.
Daniel Acosta was with his wife when they noticed the metallic object floating motionless in the sky. Acosta estimated the object was hovering at least 1,000 feet above Altadena and appeared to be 6 to 10 feet in diameter.
“It’s the strangest thing. I have no idea,” he said.
The object’s lack of motion was particularly striking, he said.
“We watched it for 10 minutes. It didn’t move,” he said. “It didn’t seem to be tethered.”
Acosta said he initial reaction was: “That doesn’t belong there, and it doesn’t make sense.”
Officials at the sheriff’s Aero Bureau said a sheriff’s helicopter often checks out potential airborne hazards that are spotted in the sky, but no information about the object was available Sunday. The crew that manned the helicopter on Monday morning was not on duty Sunday.
Local police and sheriff’s officials had no information regarding the sightings, and Federal Aviation Spokesman Allen Kenitzer said he also had no information regarding the incident, which resulted in no report by the FAA.
The National UFO Reporting Center keeps a database of unusual sighting in the sky, however, reports from Monday were yet to be uploaded to the archive over the weekend.
As conversation and speculation about the object swirled through the community, both online and real, local sleuths offered a possible answer to the mystery: an advertising balloon.
“I noticed the UFO Monday around 10 a.m. from Monrovia,” Jon Gollihugh said in a email. “It was (hovering) over the mouth of San Gabriel Canyon. There was a large buzz about it on Facebook with residents of Sierra Madre.
“One person took a telephoto shot of it. It appeared to be an advertisement balloon for a THC (E-cigarette) that got away.” he said. “I followed it across the foothills from above Sierra Madre towards Monrovia canyon around 11:30 a.m.”
Several witnesses reported seeing a large, white advertising balloon emblazoned with a corporate logo in the same time and vicinity of the object.
One photograph captured the logo of a company called “Brass Knuckles,” which sells marijuana extracts and vaporizing products.
It was not clear Sunday night whether the advertising balloon was the same object that triggered Monday’s UFO sighting reports.
Lopez said the incident has left him more curious.
“I’m kind of looking up more at the sky,” he said.

UPDATE: Some local sleuths think the object was this advertising balloon. Reads: “Brass Knuckles,” the name of a cannabis concentrate/vape company: (courtesy) 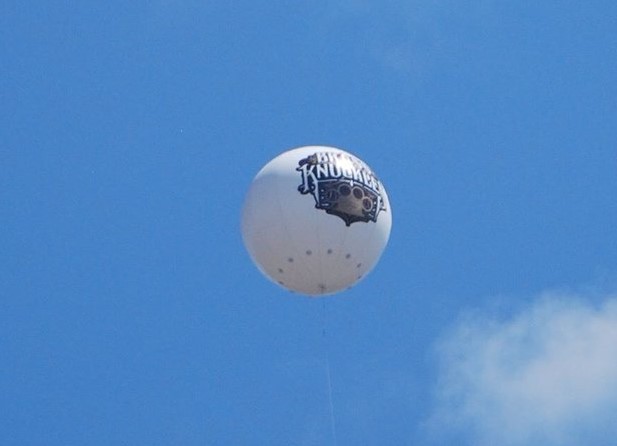