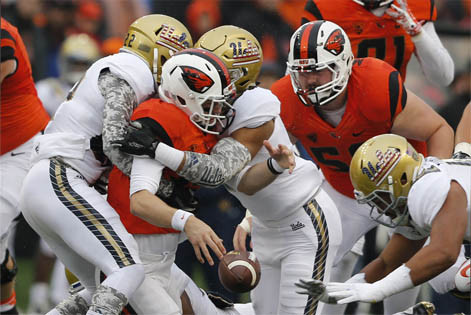 Oregon State quarterback Nick Mitchell fumbles the ball while being tackled by a pair of UCLA defenders in the first half of an NCAA football game, in Corvallis, Ore., on Saturday, Nov. 7, 2015. (AP Photo/Timothy J. Gonzalez)

Continuing the look at UCLA’s 2016 schedule, here is a breakdown of the Bruins’ 10th opponent, Oregon State.

Oregon State’s first year under Gary Andersen was just plain awful on the field. The Beavers were winless in Pac-12 play (2-10 overall) with their only wins on the season coming against Weber State and San Jose State. The team had a rotating cast of starting quarterbacks with Seth Collins, Nick Mitchell and Marcus McMaryion each starting at least one game. Mitchell, who has since transferred, started at quarterback against UCLA on Oct. 31 when the Bruins shutout the Beavers 41-0. UCLA gained 674 total yards in the rout while Oregon State failed to even reach the red zone once.

— Civil War momentum? Oregon State battled back from a 31-7 halftime deficit against Oregon to climb within three points with 7:05 left in the game. Ultimately, the Ducks pulled away to win by 10 points, handing OSU its winless conference season, but the comeback effort gave the Beavers confidence heading into the offseason, punter Nick Porebski said at Pac-12 Media Days. We’ll see if Oregon State can build on that small foundation for 2016.

— New defensive coordinator Oregon State shuffled several coaches around on offense, moving them to different positions on the staff, while also hiring a new defensive coordinator for the second straight year. Former DC Kalani Sitake took over head coaching duties at BYU and Kevin Clune will head the OSU defense, which was one of the worst in the Pac-12 last year. The Beavers were second-to-last in points (37.0) and yards (481.5) allowed per game, while also ranking last in rushing yards allowed per game (225.5).

— Stable footing on offense Three quarterbacks started games for Oregon State last year, but it seems the Beavers have a steady presence under center this year in Utah State transfer Darell Garrretson Jr. He’ll try to inject some life into an anemic Beaver passing offense that ranked last in the conference in yards per game (159.2).

— WR Victor Bolden Jr. Bolden and Jordan Villamin lead the OSUU receivers. Bolden lead the team in receptions for the past two years.  Last year, he had 46 catches for 461 yards and three touchdowns. While a consistent target on offense, Bolden is also explosive in the return game; last year be became the first Oregon State player ever to return both a punt and a kickoff for a touchdown.

— LB Caleb Saulo The team’s leading returning tackler, Saulo had 69 tackles last year while playing in 11 games. He had a career-high 14 tackles against Stanford last year. OSU’s leading tackler in 2015, Rommel Mageo, transferred to Ole Miss for his final year of eligibility.