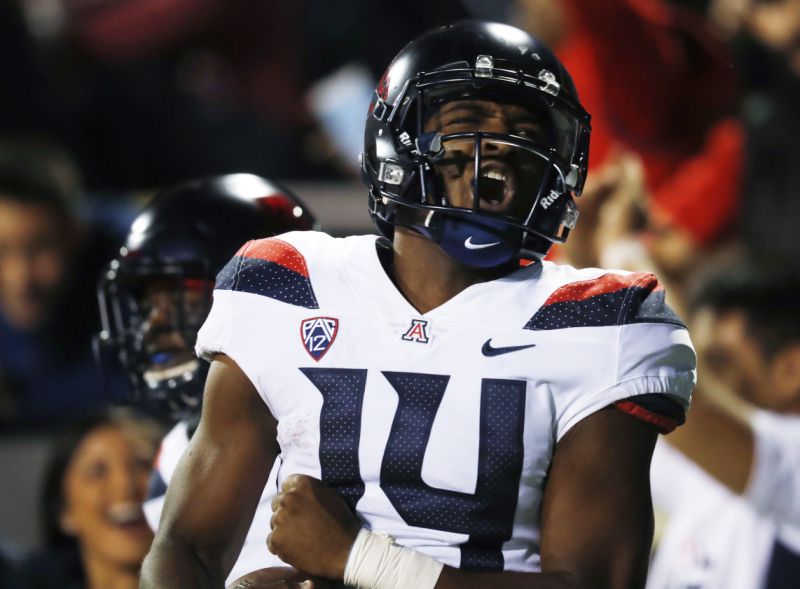 Arizona quarterback Khalil Tate celebrates after rushing for a touchdown against Colorado in the second half of an NCAA college football game Saturday, Oct. 7, 2017, in Boulder, Colo. Arizona won 45-42. (AP Photo/David Zalubowski)

After Khalil Tate ran all over the Colorado defense last week, Colorado safety Ryan Moeller told reporters he didn’t even know Tate’s number before the game. The sophomore quarterback in the No. 14 jersey is not going to enjoy that type of anonymity anymore after his 327 rushing yards set an FBS record for a quarterback last Saturday.

Whether Brandon Dawkins reclaims the starting quarterback role or the Tate Show rolls on, the Bruins will have to deal with a dynamic running quarterback. Arizona leads the conference in rushing with 321.8 yards per game on the ground. Dawkins and Tate combine for 47.9 percent of Arizona’s total rushing yards.

The Wildcats, in their second year with defensive coordinator Marcel Yates, are allowing 12.1 fewer points per game than last year.

Jim Mora has never lost to Arizona during his six-year tenure. The Bruins have won five straight against the Wildcats with an average margin of victory of 23.6 points per game.

UCLA blew out the Wildcats last year 45-24 at the Rose Bowl in quarterback Josh Rosen’s last full game of the season before injuring his shoulder the following week. Arizona cycled through three quarterbacks in that game and had to burn Tate’s redshirt after Anu Solomon sat out with an injury, Dawkins picked up a knock during the game and walk-on Zach Werlinger was ineffective.

Tate made his college debut last year against the Bruins and led the team in rushing with 79 yards on 15 carries.

The freshman from Las Vegas leads the team in tackles and sacks.

Young is another true freshman making an immediate impact for the Arizona defense. He and Fields are first and second in tackles.