The Kings sent left wing David Van der Gulik to their American Hockey League team in Manchester, N.H., on Tuesday. Their roster is down to 28 players with several more cuts to come before they open the regular season Oct. 8 against the San Jose Sharks.

Here’s what Kings coach Darryl Sutter told my fellow beat scribes when asked about team-boding trips such as the three-exhibition game trek the team embarked upon Monday: “If you have to go somewhere to learn about your personality, you probably have a disorder.”

The Kings are scheduled to hold a practice Monday morning in El Segundo and then hit the road for the rest of the week. They play against the Sharks on Tuesday in San Jose, the Avalanche on Thursday in Colorado Springs and the Avalanche again on Saturday at the MGM Grand Arena in Las Vegas on Saturday. All three games are on 790-AM. The final exhibition will be on Fox Sports West.

Then the Kings will raise their Stanley Cup banner and receive their championship rings on Oct. 8, when they open the regular season against the Sharks at Staples Center.

Jeff Carter scored three goals and Robyn Regehr struck once for the Kings in a 4-2 victory Sunday over the Ducks at the Honda Center. Carter’s goals sort of figured since he’s capable of such outbursts, but Regehr’s pinball shot in the first period didn’t. Regehr is what’s known as a defensive-minded defenseman. His offensive contributions are few and far between. They are not to be overlooked, however. Here are three things about the Kings’ second consecutive victory over their Southland rivals: 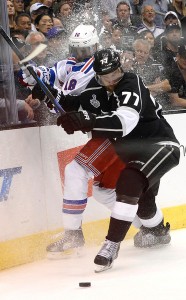 Rangers Marc Stall is checked into the boards by Kings Jeff Carter in the 3rd period of a Stanley Cup Final game. Carter had a hat trick in the Kings exhibition game Sunday. (Photo by John McCoy / Los Angeles Daily News)

First, Carter spoke after the game, a rarity. Here’s some of what he said when asked about his first three goals of the preseason: “You go to the net and good things are going to happen. Pucks drop down at your feet. It’s nothing different than what we usually do. Guys win battles and put pucks to the net. You get rewarded.”

Here’s what he said about linemates Tanner Pearson and Tyler Toffoli: “They’ve both played great for us. They worked hard this summer to make sure they were ready to roll this year. It’s a lot of fun. It doesn’t matter how young they are or who they are or where they come from if they’re good enough to play in the league, and they’ve shown it. They weren’t given anything. They’ve earned it. They spent a lot of time in the minors.”

Second, Martin Jones looked sharp in goal again, stopping 33 shots. He looked poised and ready to play if needed if starter Jonathan Quick isn’t judged sound enough to start the regular season Oct. 8. Quick had offseason wrist surgery June 24 and hasn’t played in an exhibition game yet. He has been practicing with his teammates, however.

Third, the Kings know how to sit on a lead. They were outshot 18-7 in the third period, but neither their defense nor their goaltending cracked in crunch time. The Kings blanked the Ducks in the final period despite having to kill off a two-man disadvantage. They led 3-2 going into the third and finished up with a comprehensive 4-2 victory.

Kings coach Darryl Sutter didn’t talk to reporters after Saturday’s practice. Now we know why. Actually, we knew he was headed to the race track. We just wanted him to make a few wagers for us. Runyoustupidnag was a favorite in the ninth race.

Drew Doughty awaits the start of a drill. #LAKings pic.twitter.com/5ZFtWz69gu

Kings defenseman Drew Doughty skated with his teammates Saturday and then offered this update on his recovery from a unspecified upper-body injury that kept him off the ice for about a week, including the first few days of training camp:

“Everything’s well. Everything’s good. No problems. Good to go whenever. I’m sure it’s going to be soon. I don’t know exactly (when). I haven’t really talked to anybody about it. I’m sure if I’m not in on Sunday (against the Ducks at the Honda Center) then hopefully I’ll be in on Tuesday (against the Sharks in San Jose).

“It (sitting out) is not that bad. It was frustrating when I wasn’t skating and all the guys are skating in camp and I wasn’t able to partake in that. That’s when it was really bothering me. Missing exhibitions games, as much as I’d like to get in a few to kind of get in my groove again, as long as I get two or three then I’ll be fine. I’m not too worried about it. (The layoff was) maybe, like, a week. Something like that.

“Good to go. Good to play. I think it’s just safe and making sure I’m perfectly ready to go when the time comes.”

The Kings trimmed their training-camp roster to 36 on Saturday, when they assigned right wing Brian O’Neill to the the Manchester (N.H.) Monarchs, their American Hockey League team.

Defenseman Alex Lintuniemi and forward Valentin Zykov were returned to their junior teams, Ottawa of the OHL and Baie-Comeau of the QMJHL.

Goaltender Jeff Deslauriers was released from his pro tryout.