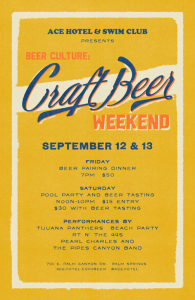 This weekend is the third annual Beer Culture: Craft Beer Weekend at the Ace Hotel & Swim Club in Palm Springs.

The event kicks off at 7 p.m. tonight (September 12) with a four-course beer pairing dinner.

On Saturday (September 13), the hotel is throwing a pool party and beer tasting event.

The hotel has a quartet of bands (Tijuana Panthers, Beach Party, RT and the 44’s, and Pearl Charles and the Pipes Canyon Band) lined up to perform at the pool party.