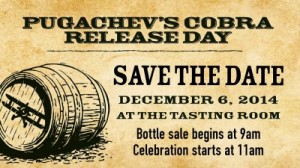 Winter is just around the corner, and it’s the time when beer lovers traditionally indulge in dark beers — porters and stouts.

One of the more indulgent dark beers out there is Hangar 24 Craft Brewery’s Pugachev’s Cobra. Part of the brewery’s Barrel Roll series, Pugachev’s Cobra is a Russian Imperial Stout aged eight months in bourbon barrels.

It’s full of flavor and plenty of alcohol (this year’s batch packs a whopping 18.9% alcohol by volume).

The past few years, the Hangar 24 has celebrated the beer’s release with an event it calls Pugafest. This year’s Pugafest is Saturday (December 6).

In addition to the current batch of Pugachev’s Cobra, the brewery will be selling bottles of five other varieties including Pugachev Royale, flavored with cacao nibs and vanilla beans, and aged an additional 10 months in brandy barrels; Pugachev’s Cobra 25, aged 14 months in 25-year bourbon barrels; and batches from previous years.

Yet another variation — Pugachev Mocha — will be available exclusively for members of the brewery’s Barrel Roll Club. 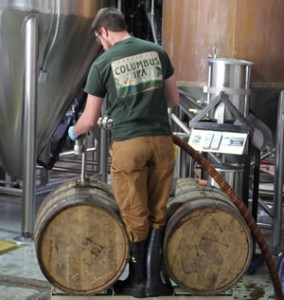 The brewery will be open from 9 to 11 a.m. for bottle sales, but that’s just the beginning of the celebration. From 11 a.m. to midnight, the brewery will be pouring — while they last — nine different versions of Pugachev’s Cobra.

To round out the celebration, the brewery is bringing in a couple of bands to perform.

For an informative look at the brewery’s barrel aging program, click here.