Rowland Unified is building a compressed natural gas (CNG) station for its fleet of new CNG busses. This station will also be open to the public at very affordable rates.  The district broke ground at 9:30 a.m. Wednesday.

“We believe this is a wonderful opportunity to be good to our environment by providing a fleet of 15 new CNG buses that serve our community. In addition, it is a new way to raise funds for our District,” said Superintendent Ruben Frutos. 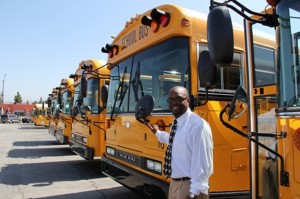 The new CNG station will be open to the public 24 hours a day. It will have two dispensers for fueling CNG vehicles (both cars and trucks) with fast-fill pumps operating at pressure ratings of up to 3600 psi.

The station will have two storage tanks with two 75 square cubic feet per minute compressors that operate both the fast-fill and the school bus time-fill CNG stations simultaneously.

The CNG time-fill station will allow Rowland Unified School District to fill approximately 25 buses in a 10 hour period. In the future, the Rowland USD Transportation Department will be upgrading the station with an additional compressor for optimal efficiency and will expand the fleet to 33 CNG buses.

Los Altos High will celebrate Dia de Los Muertos (Day of the Dead) today from 5:30 to 7:30 p.m. on their Hacienda Heights campus.

Whittier College Director of Admission Kieron Miller will help families understand the admissions process on Oct. 17 from 7 to 8 p.m. in the Hacienda Heights Library.
Miller discussed how to select colleges that are a good fit for a student. The director will also discuss writing application essays, college visits and financial aid.
The library is at 16010 La Monde St., Hacienda Heights. For details, call 626-968-9356.

In a surprise move, the largest school district in the San Gabriel Valley chose a new superintendent during a closed-door, off-site meeting at the Courtyard Marriott hotel over the weekend.

After interviewing five candidates for the job, the Hacienda La Puente Unified School District board of education voted 4-1 to promote Interim Superintendent Cynthia Parulan-Colfer to the top spot.

Board member Anthony Duarte voted no. In June, Duarte also voted against putting Parulan-Colfer into the interim position. “I thought we needed someone with a stronger instructional background,” Duarte said.

She was preceded by 40-year district veteran Barbara Nakaoka, who retired after seven years as superintendent on June 30.

The board majority said Parulan-Colfer was the best choice for the job because of her administrative skills. Previously, she headed up the district’s adult education and regional occupation programs.

“I’ve been working closely with Cindy and given that this has been one of the most difficult times to be superintendent of the district, with all the controversy, she’s handled it very well,” said board president Jay Chen.