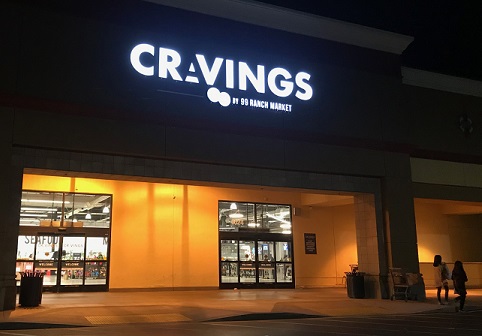 Taking over from a defunct Food 4 Less, 99 Ranch Market last October opened a warehouse-style grocery with an adjoining food hall, the first food hall to open in the Inland Valley. How about that? It’s in the Spectrum Marketplace shopping center and has nine food vendors: Cauldron, Dos Chinos, Madbun, Oi, Pinky Promise, Red Envelope, Shomi Noods, Tenori and Wingman, plus Piju, which sells international beer and wine.

They’re all Asian, sometimes fused with another cuisine. The food hall is close to Chino Hills and its growing Chinese population. Cravings’ sheer existence must bring cheer to the area’s Asians, not to mention those of us who like trying different foods.

My photographer colleagues Watchara Phomicinda and Cindy Yamanaka visited during a pre-opening event for a photo gallery and brief story. And LA Eater wrote about most of the vendors’ origins. The food hall was curated by Andy Nguyen, whose Afters Ice Cream you may know; he’s behind Cravings’ Red Envelope and Wingman.

I’ve visited twice so far. The first was in early January with a friend who had eaten there once already. We were there in the evening. You can wander among the food stalls, stroke your chin eyeing the menus, get what you like and then take a seat in a communal seating area. Each place will give you a buzzer that will alert you when your order is up. 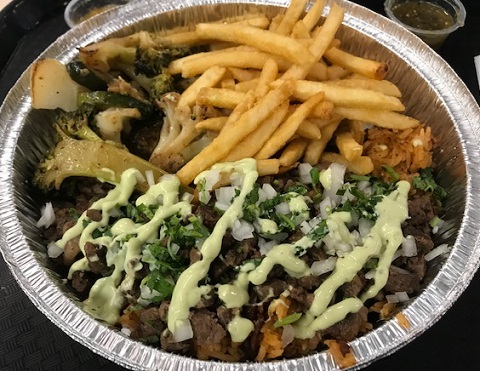 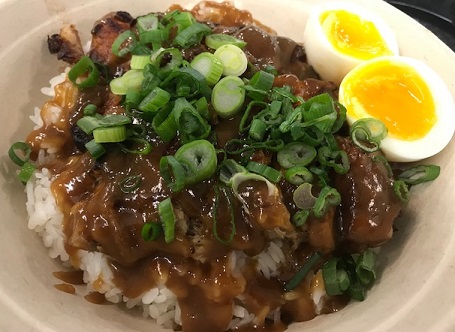 She got an asada plate with chorizo fried rice and garlic fries from Dos Chinos ($10.75). I got a Filipino-style adobo bowl ($9) from Oi Asian Fusion, which had a soft-boiled egg, pork belly, rice and adobo sauce. We liked the food fine but each felt it was lacking somehow. I also got a pineapple express Dole whip in a Hong Kong-style puffle cone from Cauldron ($6). I was asked: “Would you like it shaped into a rose at no extra cost?” I would. 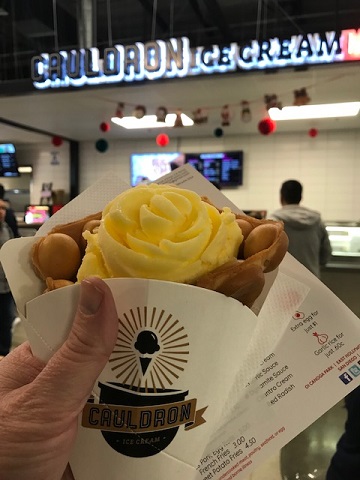 Earlier this week I went back for lunch with a second friend to try more vendors. He got black garlic ramen ($10) from Shomi Noods. Despite the garlic in the name, he thought the ramen lacked punch. We shared an order of takoyaki ($5.45), minced balls of octopus. There was no discernible octopus. 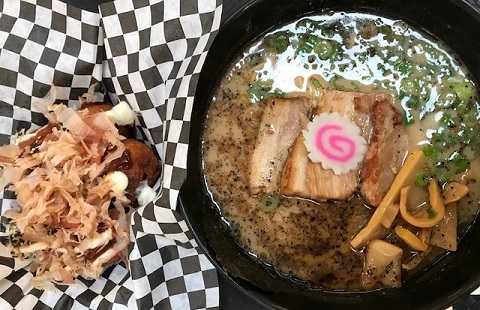 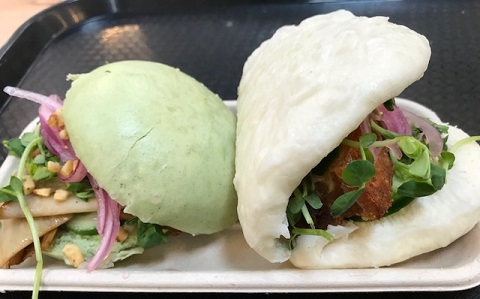 I got two bao buns from Madbun, which had a lunch special: buy one, get one half off. I got a crispy pork on a regular bun and a hoisin mushroom on a matcha bun ($7.49) and preferred the pork bun. Still peckish, I went to Dos Chinos for a single taco: Oahu shrimp ($3), with fried shrimp, red cabbage, sour cream and pineapple. Not bad. 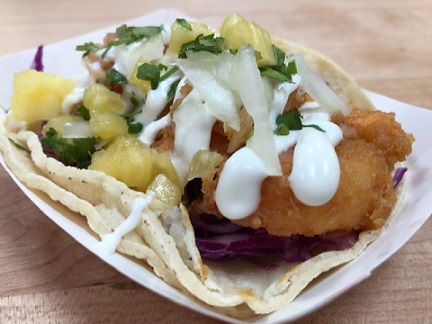 About halfway through our lunch, a Piju employee walked over to a music speaker a few yards from us, got up on a ladder and turned the volume up about twice what it had been. That was unfortunate, but maybe the young folk were pleased.

Cravings wasn’t exactly busy either time I was there, a Friday night and a Tuesday lunch, but it was populated, mostly by Asians, and of a wide range of ages, including families.

Other vendors sell chicken wings and sandwiches (Wingman), musubi, sushi and bowls (Tenori), pho (Red Envelope) and desserts (Pinky Promise, a Taiwanese bakery). I’d had the idea of visiting another two or three times until I’d hit them all, but that’s probably carrying things too far. (Note: Which is not to say I might not do so anyway.)

“I want to like this place. I might not be picking the right things,” said my friend from the January visit. I know what she means. The food isn’t wowing me, but it’s all right, the concept is neat and it’s a fun place to meet up. You ought to try visiting once. 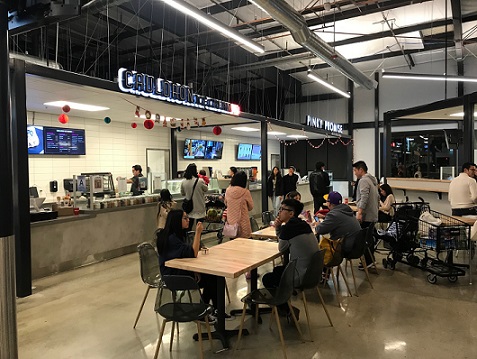