A journalist for more than 30 years, David Allen has been chronicling the Inland Valley for the Daily Bulletin since 1997 and blogging since 2007. He is the author of three books of columns: "Pomona A to Z," "Getting Started" and "On Track." E-mail David here.

At Wednesday’s San Bernardino City Council meeting, a county supervisor presented a ceremonial check for $1.1 million, the council OK’d opening talks with a developer over the Arden-Guthrie property, development activity is picking up and the council postponed giving itself a pay raise. I tie it all together and eavesdrop a little in my Friday column.

In Wednesday’s column, the Fabulous Mrs. Unruh again takes the spotlight as readers share stories about the late entertainer. Also, readers kibitz about Jewish delis, and my fingers are crossed that this will tie a bow on that topic for a while. Oh, and there’s a brIEfly item too.

A UCR professor, Richard T. Rodriguez, DJs a weekly show, “Dr. Ricky on the Radio,” focused on 1980s British post-punk music. He’s also the author of a new book on the links between Latinos and this music from across the pond. I sit in as he DJs Thursday’s show, which he billed as a sort of soundtrack for his book, and write about it in my Sunday column.

Wrapping up (I hope!) what turned into a Jewish deli trilogy of columns, I’m invited to lunch at the closest nearby thing to a Jewish deli, Kara’s Korner in Glendora, by a group of old guys. It was fun, and I write about it in Friday’s column.

I happened upon a little project worth some ink: A long-lived community theater group is reviving its one-act play, “The Silver Dollar,” this weekend in Pomona. It’s about the Chicano Moratorium and the death of journalist Ruben Salazar and has been performed by the group, its originators, almost annually since 1980. That’s the subject of my Wednesday column.

A little Riverside history with a twist: The Golden State Theater was burning in 1990 while moviegoers a block away at the Fox were watching a movie with a scene in which a movie theater burns down. I tell the story of the Golden State and its unusual demise in my Sunday column.

How’s the heat wave been treating you? Probably terribly. I’m surviving, but my house and two portable a/c units are no match for 100-degree temps. I write about that, as well as present more reader stories about where they were when they heard Elvis died and bid farewell to the queen, in Friday’s column.

Following up on on my recent column about delis and a deli exhibit, I travel to distant Tarzana (by car, not jungle vine) to eat at a deli I had mistakenly listed as among those closed in recent years, and also round up comments from readers. If you live in the Inland Empire, well, as one Riverside reader put it, it’s “a Jewish deli desert.” Not a Jewish deli dessert, which would be delicious. Read more in my Wednesday column. 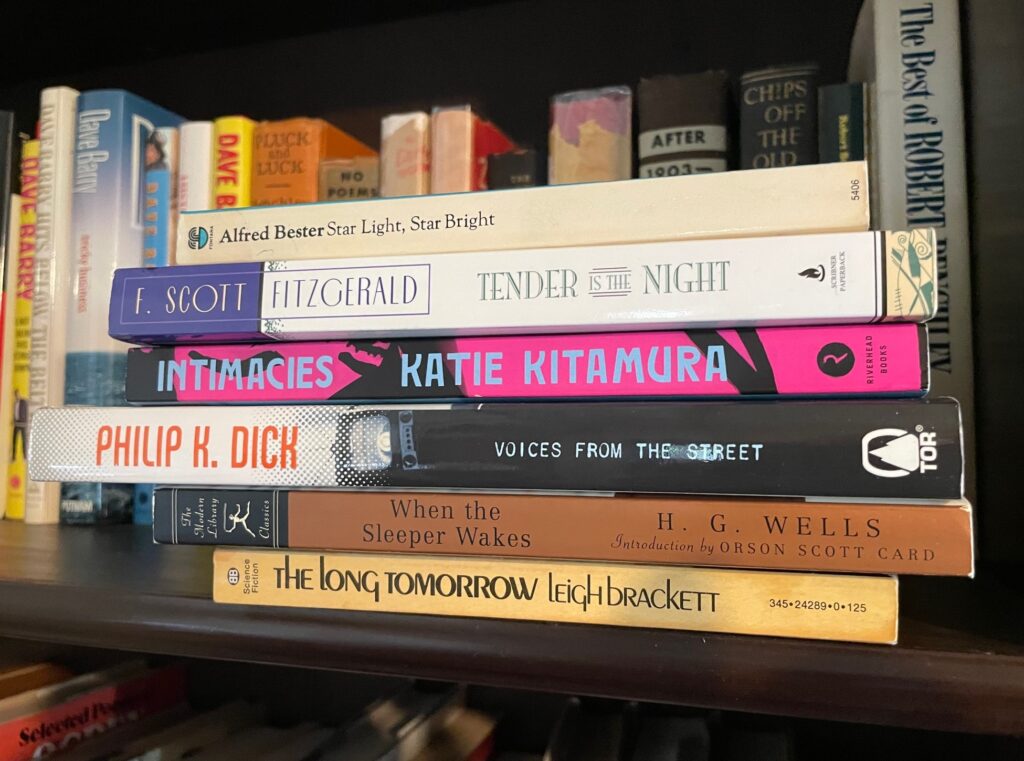 September begins the final third of 2022. But in the Reading Log we’re looking back at August, the end of the middle third. I read six books, all fiction, with the titles forming a sort of story from nighttime to wakefulness, at least to my mind. Silly, sure, but this approach got me through some of my oldest unread books, so it worked. Let me run ’em down.

“Star Light” (1978): The second of two British editions of Bester’s 1950s short SF, each story has a witty, confident intro by the author. One story and two nonfiction pieces were new to me; one of the latter is a stylish 25-page biographical sketch about his writing career. (Bought at Powell’s Books in 2019.)

“Tender” (1934): Starts slow, and you wonder what it’s about and why you should care. Having brought the novel with me on a trip, I stuck with it rather than giving up as I might have done at home, and gradually came to like and then love it. (Bought at Borders, RIP, in 2008 from a sale table at half price, only to have the book hang around unread for the next 14 years, which wasn’t much of a bargain.)

“Intimacies” (2021): A translator whose role is to remain neutral finds herself in a series of ambiguous encounters that she has trouble parsing. She begins to wonder if neutrality is for her. I found the narrator’s vague unease and discomfort, and Kitamura’s run-on but clear style, both compelling. I read this in three days, very fast by my standards, and that should count for something. (Bought this in August at Book Culture in New York City.)

“Sleeper” (1899): Great title and concept, in which a man who sleeps for 203 years, then suddenly awakens, is venerated as the hope of mankind. This has its moments, but they’re interspersed between very dull exposition about this future society. A few racist comments are a downer too. Also, Wells wasn’t much for romance in his novels: The most emotional moment is when the Sleeper and his love interest, throbbing with emotion, “clasped hands.” (Bought at Glendale’s Brand Books, RIP, in 2005.)

“Voices” (2007): One of PKD’s early mainstream novels that weren’t published in his lifetime and which if they had might have changed his trajectory away from science fiction, for which we’d be the poorer. Ah well. “Voices” has some of his later hallmarks, is rarely dull (but also rarely exciting) and offers a glimpse of life in the Bay Area of the early 1950s. The main character’s psychotic break is well-realized and disturbing. Misses PKD’s humor and imagination, though. (Bought at Berkeley’s Moe’s Books as a remainder in 2013.)

“Tomorrow” (1955): After cities are destroyed by a devastating nuclear war, America essentially turns Amish, because the anti-technologists the only ones who know how to survive without modern comforts. A boy who’s unsatisfied with that life goes off in search of the Camelot he’s heard about. Once he finds it, he’s not sure he likes it any better. Thoughtful and unexpected. (Bought at Anaheim’s Book Baron, RIP, in 2007.)

Overall, a pretty good month, with “Intimacies” one of my 2022 favorites and “Tender is the Night” and “The Long Tomorrow” both standouts as well.

With two-thirds of the year passed, I’m at 55 books, for me a blistering pace. I may slow down to read a couple of long ones, but I’d say 70 is an achievable goal, possibly 75, and either would be my second-highest total since I’ve been keeping track (my high is 82).

As always there are a few dozen books I wish I could get out of the way before the calendar gets replaced: titles that have lingered on my shelves since the ’00s, the rest of Shakespeare’s plays, gifts from friends, books I have been seriously intending to read for a half-dozen years or more and which almost certainly will be crowded out until next year (or, in some cases, later). Ah, me. But I’ll get to a few choice ones before New Year’s. (If you’re wondering, my total unread book count is down to 113, unimaginable a few years ago.)

My “books acquired” section is on the long side: nine. That’s made up of one book from New York, one from a store in Orange where I have trade credit, one from a Little Free Library, one advance copy of a soon-to-be-published book that I will be reading for work and five from Powell’s in Portland (two stores). Under the circumstances, I like to think I showed admirable restraint, given that I visited six stores. I even walked out of NYC’s The Strand and The Mysterious Bookshop without any purchases.

How was your August — besides hot, I mean — and do you have any reading goals for the last part of this year?

Next month: The natural consequences of a world of its own. 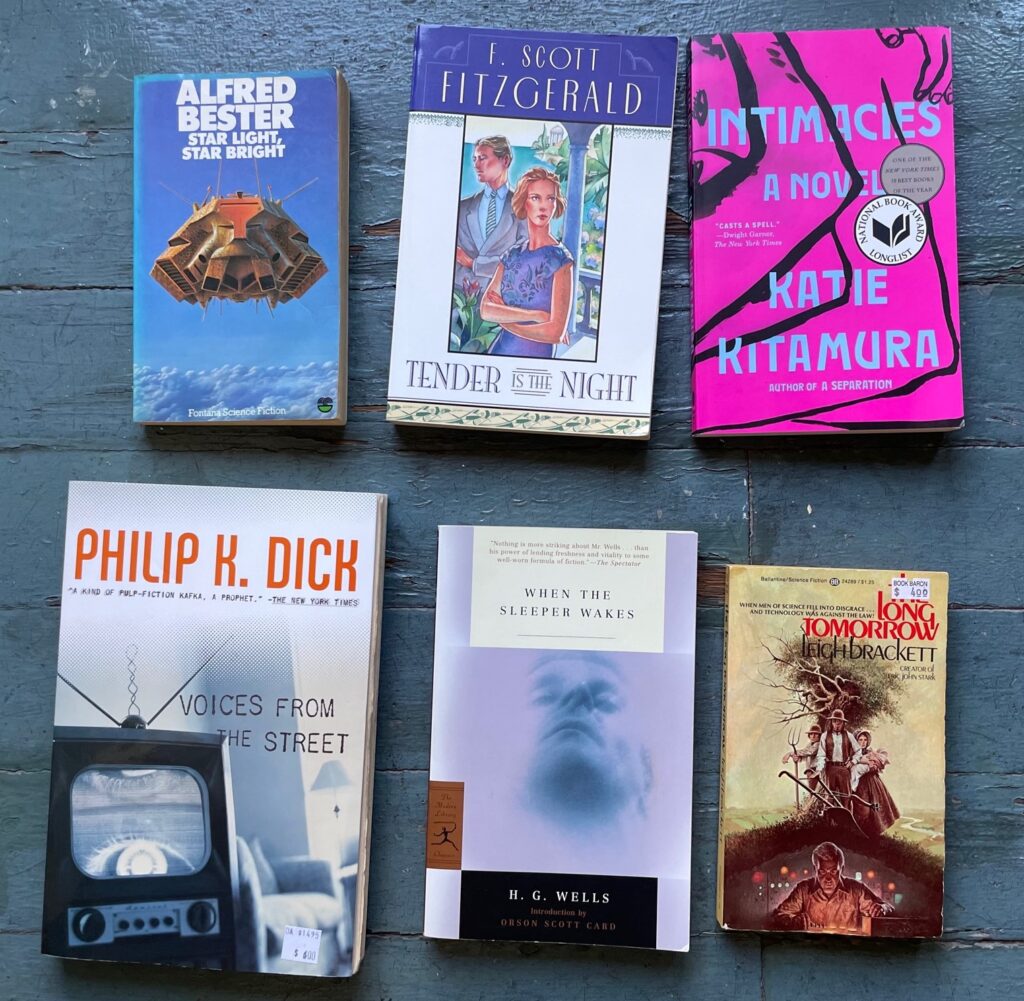 For the holiday weekend, I excerpt reader comments on recent travel columns involving the Madonna of the Trail statue that I saw in Illinois (with some history of Upland’s) as well as thoughts about New York City and Portland. Those are in my Sunday column. Look for one or two similar columns soon.