Happy December! Are you finding time to read despite the holidays? (Or because of the holidays? We don’t judge at the Reading Log.) As you can see above, I got in two books in November. One is in the landscape format and was too long to fit on my usual shelves for a photo showing its spine, so I had to improvise by placing it atop some large books, with the other book, a mass market paperback, on top. My two editions of the Science Fiction Encyclopedia and three film guides are no doubt excited to get some screen time.

“Best of Stanley G. Weinbaum” (1974): This is a collection of 12 of the 21 stories penned in the 1930s by Stanley Weinbaum, often considered the first great science fiction writer. He died of cancer less than two years into his writing career. His story “A Martian Odyssey” is a classic, in part because he created a truly alien race, but one I’d never read until now. Faced with an otherwise unfamiliar table of contents, I had feared that Weinbaum would be a one-trick pony. So it was a delightful surprise to find every story here enjoyable. Also, to find that “Odyssey” had a sequel, and that characters in some other stories recurred too. This is dialogue-driven, essentially cheerful SF, one where the male hero usually gets the “girl,” but a lot of fun to read. This book is the first Ballantine Best of, a series that grew to 21 volumes collecting short stories by many classic SF writers.

“Silent Visions” (2011): A remarkable feat of detective work, this matches up background images shot on location in Harold Lloyd’s silent films against vintage and modern photos of the same streetscapes. There’s usually some clue in the background — a street sign, a business name or a notable building — that allows Bengtson to determine the location. Neat, eh? One surprise is that in LA, for all its teardown reputation, a majority of the buildings remain at least semi-intact after 80 or 90 years. Another is that we’re not 100% sure how Lloyd filmed the “Safety Last!” clock stunt. That’s the one where Lloyd appears to hang off a clock face several stories above downtown L.A. Here’s a link to a snippet of the film to refresh your memory. (Let me add that Bengtson’s educated guesses sound correct. It involved building a fake two-story facade on a downtown rooftop and shooting from angles that preserve the illusion.) With multiple photos per page, the book’s page layout can be a challenge to follow, and I admit I considered giving up at times. But patient people who dote on LA and/or NYC history and silent films will be delighted.

And that’s about it. I finished these two in mid-month, upon which I read bits of three other books, but nothing I completed by the end of November. I thought about delaying the Reading Log for a week to enable me to finish a third book…but the thing is, I may end up reading only two books in December, so why rob from Peter to pay Paul?

Both my books this month were purchased within the last decade, which isn’t something I can say very often. Weinbaum was bought used in 2011 from Whittier’s Half Price Books and Bengtson followed in 2012 via (hiss) Amazon.

How was your November, readers, and do you have any reading plans for the last month of the year?

Next month: a literary biography, if you want to know the truth (that’s a hint as to the subject). 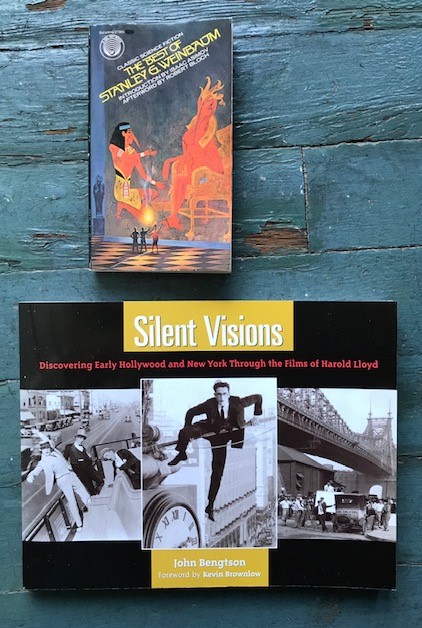