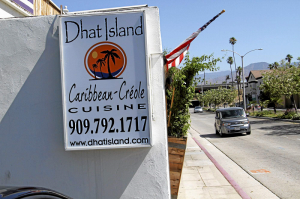 Time has run out for the Carlo and Angela Alcé, owners of Dhat Island in Redlands.

The restaurant will serve its last meal in its current location on Saturday (November 22).

Troubles began back in June, when the property where the restaurant is located was sold.

Initially, the restaurant was supposed to be vacated by the end of September, and in that month, the new landlord blocked the entrance to the small parking lot that was used for restaurant patrons.

It was unblocked in early October and the new landlord has let the Alcés use it until November 30.

The owners are looking to relocate in Redlands by early next year, and their other location — at 69830 Highway 111 in Rancho Mirage — remains open.

The couple are known for giving back to the community, and even with the impending closure, they are hosting their annual pre-Thanksgiving dinner for the needy on Sunday (November 23).

The Alcés will also still be available for catering jobs.

For more information, click here for an article from the Redlands Daily Facts’ Sandra Emerson.