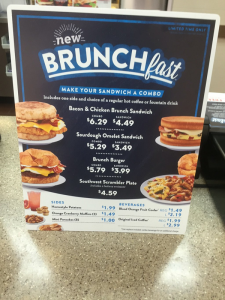 Is it too late for breakfast, but too early for brunch?

Or is it brunch, but more breakfasty?

Only Jack in the Box can tell.

Like Taco Bell’s Fourthmeal, Jack in the Box’s Brunchfast is a completely artificial construct designed for one thing: Sell more food.

Co-worker James Williams happened upon a Jack in the Box in Moreno Valley at the end of April which was testing several Brunchfast items.

It turns out it was one of nearly 20 locations in Riverside County testing the items.

But just what is on the Brunchfast menu? A returning Munchie Meal entrée, a couple of new sandwiches, a new plate, and some new sides.

The combos include one side and either a regular hot coffee or fountain drink.

Will the new items get a wider release? Ask the guy with the round white head and pointy hat.