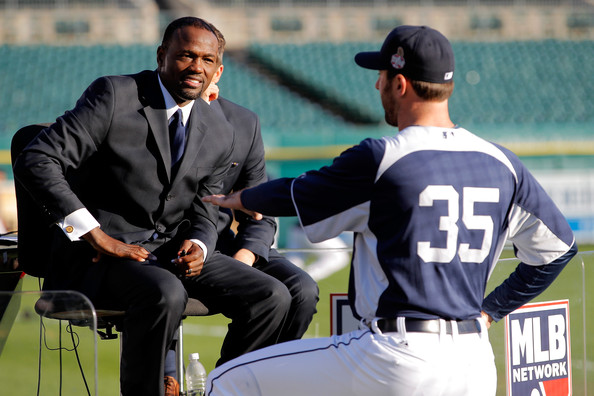 Harold Reynolds (left), Kenny Albert and Tom Verducci will share the broadcast booth on Fox Sports 1 for games 1 and 2 of the Dodgers-Nationals series. (Getty Images)

WASHINGTON, D.C. — Colleague Tom Hoffarth has the goods on who will be narrating the Dodgers’ National League Division Series against the Nationals in his media column today:

We regret to inform that, while Kenny Albert is doing play-by-play and Tom Verducci is on as a booth analyst, Harold Reynolds will also sit at the adults’ table on the call for Games 1 and 2 of the Dodgers’ National League Division Series opener at Washington, starting at 2:30 p.m. Friday, with Game 2 at 1 p.m. Saturday, both on FS1.

Charley Steiner and Rick Monday have the entire nine innings on radio via the Dodgers’ KLAC-AM (570).
Vin Scully has the rest of his life off.

When Game 3 comes around Monday at Dodger Stadium — first pitch is to be determined since L.A. and San Francisco will each have home games that day and there may not be a Game 4 in either American League Division Series — it’ll switch to the MLB Network with Bob Costas, Jim Kaat and Jon Paul Morosi. Be prepared now to locate it. For those who don’t normally have it, MLB Net is offering a free preview for those with DirecTV, Dish, Frontier and Verizon FiOS from Thursday to Tuesday. For those who are still in the dark about where it is on their system, go to www.FindMLBNetwork.com. Or trust you’ll find it on AT&T U-verse (1634), DirecTV (213), Dish (152) and Frontier (586). The channel varies on Spectrum, Cox, Comcast and Charter.