The Kings recalled Kevin Gravel from their American Hockey League team in Ontario on Thursday in order to bolster their defense corps in advance of their game later in the evening against the defending Stanley Cup champion Pittsburgh Penguins.

Gravel had two assists in six games this season with the Reign.

Defenseman Brayden McNabb is on injured reserve because of an upper-body injury.

Tom Gilbert had a hearing with the NHL in the wake of his hit to the head of the Ducks’ Nick Ritchie in Tuesday’s game. Gilbert faces a possible suspension.

The American Hockey League’s California migration became official Thursday. The Kings will shift their top minor-league team from Manchester, N.H., to Citizens Business Bank Arena in Ontario and the Ducks will move theirs from Norfolk, Va., to Valley View Casino Center in San Diego.

Two other teams in the Pacific Division, the Arizona Coyotes and the Vancouver Canucks, will keep their affiliates in Portland, Me., and Utica, N.Y., respectively, for the time being. It’s possible they could join the westward migration at a later date.

The moves were announced during a press conference in San Jose, where the Sharks’ minor-league team is expected to make its temporary home while another site is selected. Fresno and Sacramento are the cities rumored to be the permanent location.

“To borrow a word from the recently retired Teemu Selanne, it’s an unbelievable day for California hockey, for Anaheim and the organization and the city of San Diego,” Ducks general manager Bob Murray said. “This is a dream come true.”

Luc Robitaille, Kings president of business operations, praised the spirit of cooperation among the five teams to get the deal presented and approved by the AHL during its board of governors meetings over the weekend.

“It was a true team effort,” Robitaille said. “For the growth of hockey, it’s a tremendous thing for California. Five (AHL) teams will be playing on the West Coast now. Fans can see players who are one phone call away from the NHL now. It’s going to be a lot of fun now.”

The Kings said they would announce further details Friday.

The Reign, which will play out its ECHL season in Ontario, will move to Manchester, N.H., for next season.

The Kings, Ducks, Sharks and other Pacific Division teams have long wanted their American Hockey League teams to be closer than Manchester, N.H., Norfolk, Va., and Worcester, Mass. Thursday, they and the AHL will announce a major shift in the form of a Western Division in the league. The Kings will shift their top minor-league team to Ontario. The rest is explained here in a story from earlier this month: http://www.dailynews.com/sports/20150109/la-kings-anaheim-ducks-appear-set-to-move-minor-league-teams-to-southern-california

You can watch the announcement Thursday at 12:30 the AHL’s website.

Here’s some of what Kings forward Jeff Carter had to say about teammate and friend Mike Richards clearing waivers and being assigned to Manchester of the AHL on Tuesday: “It’s tough, obviously. We’ve got a pretty close team here. Any time anybody leaves it’s always tough. We understand those things happen.

“I saw him last night. … I think he’s all right. Nobody wants to get sent down. It’s a (lousy) part of the game. I think he’s handled it well. He’s been around a long time. He knows how it works. I’m sure he’ll work hard and we’ll see him here again soon.”

Struggling forward Mike Richards cleared waivers Tuesday morning, as expected, and the Kings will assign him to their American Hockey League team in Manchester, N.H. They expect him to report later this week and to improve his game with the idea that he could return to the Kings for the playoffs in April. Richards had five goals and 10 assists 47 games before the Kings put him on waivers Monday. The 29 other teams in the NHL had 24 hours to claim him, but none did.

“The way the schedule is in Manchester, you’re able to probably work on some things you don’t have the time to up here,” Kings general manager Dean Lombardi said. “So, if he goes down there and attacks this, there’s no reason he can’t come back, because our cap is the same in terms of the numbers right now. … There’s time for him to easily clean some of this up and be what he usually is in the playoffs. But if he says he doesn’t want to report, then that’s not an option.We’re not going that route.”

The Kings on Thursday assigned forward Nick Shore and goalie J.F. Berube to their American Hockey League team in Manchester, N.H. Shore made his NHL debut Saturday against the Ducks and recorded his first point, an assist, Wednesday against the Sharks. Berube has yet to play in his first NHL game. He was selected recently to play in the AHL All-Star game. 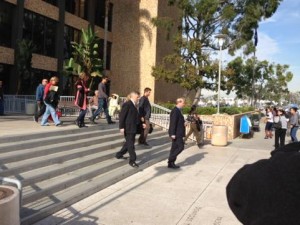 Slava Voynov’s trial for domestic violence will be March 2.

The hockey gods New York Rangers coach Alain Vigneault has referenced throughout the Stanley Cup Final made their presence felt at Madison Square Garden Wednesday night. Specifically, they seemed to spend most of their time on his team’s goal line, where two potential Kings goals were spectacularly denied in the Rangers’ 2-1 win in Game 4 of the Stanley Cup Final.

Given their first opportunity to dwell on poor “puck luck,” the Kings weren’t wallowing after their practice on Thursday.

“Puck luck is for cop-outs,” Kings right wing Justin Williams said. “I don’t believe in that at all. I’m a true believer that you get what you put into it and (Wednesday) night we simply weren’t good enough and we didn’t get the pay-off.”

Once in the first period of Game 4 and again with a little more than a minute to play in the game, two Kings shots came to a halt behind Rangers goalie Henrik Lundqvist without crossing the goal line. Each would have tied the game.

The play on which the Kings scored their lone goal didn’t exactly begin in conventional fashion, something Vigneault was quick to point out upon being informed of Williams’ comments about puck luck. Rangers defenseman Dan Girardi’s stick broke, setting up Dustin Brown’s breakaway goal that pulled the Kings within a goal in the second period.

“Whether you call it hockey gods or hockey plays or whatever, like when Dan was shooting the puck from the point and the knob of his stick stays in his hand, you can call that a hockey play or you can call it whatever you want,” Vigneault said. “It doesn’t matter to me. Those are things that happen. Bounces happen during the game.”