Going into Wednesday’s exhibition against the Ducks, it would appear three and possibly four players could be battling for ice time as the Kings’ third- and fourth-line centers. Andy Andreoff, Trevor Lewis and Nick Shore filled those roles last season, but now a fourth name has emerged as a candidate.

Adrian Kempe, a 20-year-old first-round draft pick in 2014, got a chance to play between Tanner Pearson and Tyler Toffoli during the Kings’ 4-3 split-squad exhibition victory Monday over the Arizona Coyotes at Staples Center.. Kempe didn’t have a goal or an assist, but Pearson and Toffoli had one of each.

Although he’s listed as a left wing (or right wing, depending on the website you search for information), Kempe played center quite a bit last season with the Ontario Reign of the American Hockey because of injuries to other players. So, it wasn’t a stretch to see him playing Monday between Pearson and Toffoli. Kempe was credited with two shots on goal, one hit and nine victories in 18 faceoffs in 16:26.

Here’s what Kings forward Marian Gaborik said about adjusting his style of play to fit his more defensive-oriented teammates: “Yeah, I had to adjust a little bit, to buy into the system, play on the right side of the puck and make sure to play in the game and do my responsibilities as well. So, I think we’re rolling very good as a team right now, and I just have to keep it up.”

Here’s what Kings captain Dustin Brown said about Gaborik’s play: “I think we all understand what he was brought here to do, and that’s score big goals, and that’s what we expect of him. It’s the time when he’s not scoring big goals that we need him to play Kings hockey and tonight he came through for us huge. … I think it’s a work in progress.”

Carter and wingers Tanner Pearson and Tyler Toffoli ignited a 6-1-1 start to the season for the defending Stanley Cup champion Kings. Now, with Pearson sidelined by a broken leg, Dwight King has joined Carter and Toffoli, and if the Kings are a one-line team again, then so be it.

Toffoli recorded his first NHL hat trick and added an assist in the Kings’ 5-3 victory Thursday over the Calgary Flames. Carter had three assists and King had one goal and one assist in the pivotal third period, when the Kings broke open a close game.

Thursday’s game had the look and feel of a Kings contest from October, when That 70s Line ran wild. It was a short-lived hot streak for the three players with uniform numbers in the 70s, and the Kings came crashing to earth and, ultimately, out of a playoff position.

When coach Darryl Sutter shifted King onto the line with Carter and Toffoli, things began to click offensively again. Maybe it’s the uniform numbers. After all, King wears No. 74 on his jersey, joining No. 77 Carter and No. 73 Toffoli.

Whatever it is, the Kings couldn’t have won Thursday without That 70s Line.

“We’ve been trying to kind of work from our end out, the whole team,” Carter said of his line’s standout play during a three-game winning streak. “I think it’s been coming along, especially near the end of the road trip we saw it paying off for us. And again tonight.”

Toffoli, in particular, was superb against Calgary.

“He came back from his mono and had a really good couple of games and then he probably hit the wall a little bit,” Sutter said, referring to a bout of mononucleosis that sidelined Toffoli for six games last month. “Then the last three or four games, I think he and the line have carried us.”

Kings center Jeff Carter’s defensive rating of plus-14 in games at home was seventh-best in the NHL as of Friday morning; his rating of minus-12 on the road was 798th. Thanks to Yahoo Sports for unearthing the facts and figures.

Coach Darryl Sutter had this to say about the Kings’ move to place struggling forward Mike Richards on waivers Monday morning:

“This is hockey and some of you guys don’t get it, period. In terms of lots of players go on waivers and lots of players clear waivers and still have great years in front of them. It’s just people in media who want to continue to beat people up because they can’t do it themselves. … I think Mike’s still go lots of hockey left.”

Question: How did it get to this point?

Lombardi: “It’s a process you work through. It’s not like all of a sudden it dawns on you. You’re starting to think about and you work through the process. I think it’s fair to say we made a final decision that we were one way our another deal with it after the All-Star break.”

Question: How did he take it?

Lombardi: “You can ask him. The process isn’t done because he’s still got to clear. I’ll probably talk to him a little more tomorrow. I’m sure it’s not easy on anybody. These are the tough decisions you’ve got to make.”

Question: You could have bought him out last spring, did you hope that would get him going?

Lombardi: “It was a combination of that and I think it’s … we expect loyalty from our players and it’s a two-way street. I think under the circumstance and what he’d done for us, I thought he deserved a chance to get back to what he’s capable of. That’s a hard balance. Obviously, I’ve thought about that a lot. There’s a new wave thing out there that players are commodities and passion and loyalty, those values made sports so special, the commodities guys will tell you that don’t matter. Well, that’s been a big part of the success of this team, I believe. And that’s how I came down on it. If you’re going to expect loyalty from your players, you have to at times show loyalty to them. Then the issue becomes, where’s that line.

“So, when I step back now, I’m never going to lose my belief in those values being critical, but as we see in the cap area … the cap is designed to eliminate those types of emotions. Fortunately, I still believe they’re a critical part of a good team. In retrospect, if you the commodities angle, you say, well, it should have been easy. If you use the belief in the intangibles it’s not. It is what it is. In the end, I felt he deserved that chance for all he’d done for us. I mean, I don’t think there’s any question that we don’t win that first Cup without what he did for this team. Obviously, you don’t win the second one. But you’ve still got to be at a certain level here that has to get done.”

Question: What about the financial standpoint  …

Lombardi: “That’s what we’ve got to work through. Mike in his career, he’s shown he can be a .300 hitter and get you 80 RBIs and be an All-Star player. So, maybe at this stage, it’s not there. I still think he’s capable of being a .280 hitter and do a lot of those things for you that only he can do. Let’s face it, right now, he’s batting .200. But I don’t see any reason why he can’t get back to that. He’s got to do what he’s got to do. There’s a lot of things that remind me of where Teemu Selanne was at this stage. Remember when he had fallen off the map in Colorado and it looked like he was done? Then he started changing some things and went on to have 10 great years, for crying out loud. It’s up to Mike. In my mind, I believe if he wants to, he can get back to that. I see no reason why not. But it’s going to be up to him.”

Kings forward Mike Richards played only 9 minutes, 7 seconds in Thursday’s 4-3 loss to the New York Rangers, a season low. He was scoreless and has five goals and nine assists this season. His plus/minus defensive rating is minus-8. He and frequently-scratched forward Jordan Nolan skated Friday in yellow jerseys while the rest of the Kings’ forwards were grouped in threes in like-colored sweaters.

It led to speculation Friday that Richards could be scratched for Saturday’s game against the Winnipeg Jets, the first time he would miss a game for any reason since the 2011-12 season, after an off-season trade from the Philadelphia Flyers. Richards played all 41 games so far this season, after playing in all 82 last season and all 48 during the lockout-shortened 2012-13 season.

“I still, obviously, think I can play a lot more minutes,” Richards said after Friday’s practice. “But at the same time, you play what you’re put in a position of. I’m not going to cause a scene or doing anything to take the focus away from everything. I’m just going to come to the rink every day and play hockey. It is what it is, to be honest. You come here every day, you work, you get ready for a hockey game just like any other year or any other time, and that’s about all you can do.” 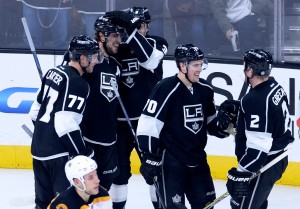 Kings forward Jeff Carter hasn’t scored a goal since Nov. 18 against the Florida Panthers, a dreary stretch of 13 games in which he also has only three assists. So, when a beat reporter asked Kings coach Darryl Sutter on Wednesday if Carter was getting enough scoring chances, Sutter said, “Not consistently. Not consistently.”

Sutter also said: “He hasn’t scored a goal for a month tomorrow. Nov. 18. I have it all marked down. … We’re trying to get all our top guys to be more productive players right not. It’s not just Jeff Carter.”

In addition, Sutter said one way to eliminate some of the pressure from Carter is having him play on center Anze Kopitar’s wing. “There was a time last year when (Dwight) King, ‘Kopi’ and ‘Carts’ were our best line,” Sutter recalled. “Just trying to manage it game by game … the reason why you shift guys around is because top guys aren’t producing. That’s clearly why, if you look around the league now, why guys get shifted around.”

Well, it depends. Here’s what Alec Martinez said to say after playing for the first time after sitting out for seven games because of finger surgery: “It felt good to be back playing again. It’s not too much fun being out. As for my game, I’m not too happy with it. I had to shake off a little bit of rust. I know I’ve got a better game in me next game. At the end of the day, we got the two points. That’s all I care about.”

Here’s what Kings coach Darryl Sutter said, bringing up Martinez’s name after reporters failed to do so after a 2-0 victory over the Boston Bruins on Tuesday at Staples Center: “Whenever guys come back from injuries, they have a lot of energy, and he and Robyn (Regehr, his defense partner Tuesday) were really good.”

Kings coach Darryl Sutter had this to say after defensive-minded defensemen Matt Greene and Robyn Regehr scored second-period goals in a 5-2 victory over the Florida Panthers: “It’s good to see Robyn and Greene score. They don’t get much credit and they give you the blue collar every night. They are our two most consistent defensemen, for sure. It’s always good to see them score.”