Goalie Jonathan Quick could be sidelined by a groin injury until mid-February. (Photo by John McCoy Daily News)

Kings general manager Dean Lombardi said Wednesday he now expects injured goaltender Jonathan Quick to be sidelined until at least mid-February, or one month longer than the original three-month layoff projected back in mid-October. Lombardi spoke with traveling beat reporters before the Kings’ practice in Buffalo, N.Y., breaking the news during a rambling answer about the prospects for a trade to bolster the team’s goaltending in the absence of Quick.

The Kings have been without Quick since he injured his groin in the first period of the Kings’ season-opening game Oct. 12 in San Jose.

The Kings are 14-12-2, fifth in the Pacific Division, after opening a seven-game trip with a 6-3 loss Tuesday to the Buffalo Sabres. Jeff Carter, who had two goals Tuesday against Buffalo, said the Kings were a “fragile team.” The Kings’ trip continues Thursday against the Detroit Red Wings, who are 13-13-4, sixth in the Atlantic, after a 4-1 loss Tuesday to the Arizona Coyotes. 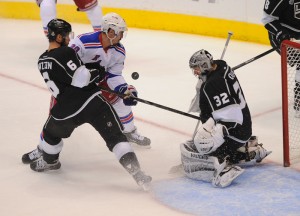 The Kings placed four players on waivers Monday, including goaltender Peter Budaj. Other teams have until 9 a.m. (PT) to claim any or all of the four: Budaj, goalie Jack Campbell, forward Andrew Crescenzi and  defenseman Vincent LoVerde. The Kings retain their rights if they’re not picked.

Of the four, Budaj would seem to have the best chance to be claimed by another NHL team. He was 42-14-4 with a 1.75 goals-against average and a .932 save percentage in 60 games last season with the Ontario Reign of the AHL.

The moves Monday all but assure the Kings’ backup goalie to start the season will be Jeff Zatkoff, who signed a two-year, $1.8-million free-agent contract last summer. Zatkoff will serve as Jonathan Quick’s backup in 2016-17 after appearing in 14 games last season with the Stanley Cup champion Pittsburgh Penguins. He was 4-7-0 with a 2.79 goals-against average and a .917 save percentage.

–Injured winger Marian Gaborik was back in El Segundo. He didn’t speak to reporters about the broken foot he suffered while playing with Team Europe in the World Cup of Hockey. He was wearing a protective walking-boot style cast on his right foot and needed the aid of crutches to get around the training facility.

–Jonathan Quick practiced with the B Group of players, but it remained to be determined when he would make his exhibition debut in goal, according to assistant coach David Payne. Quick could play in Sunday’s exhibition against the Ducks at Honda Center. Or it could come in exhibitions Friday or Saturday in Las Vegas.

–There’s no exact timetable for the return of Drew Dougty, Anze Kopitar and Jake Muzzin from the World Cup, Payne said. The three are due some rest and recovery time after Doughty and Muzzin’s Team Canada defeated Kopitar’s Team Europe in the two-game World Cup final. They mighty not play in any exhibitions.

–The Kings’ A Group, which includes Jeff Carter, will face the Edmonton Oilers in an exhibition Sunday in Vernon, British Columbia. Darryl Sutter will coach the team. The Kings’ B team faces the Ducks with Payne and Mike Stothers, coach of the Ontario Reign of the AHL, behind the bench at Honda Center.