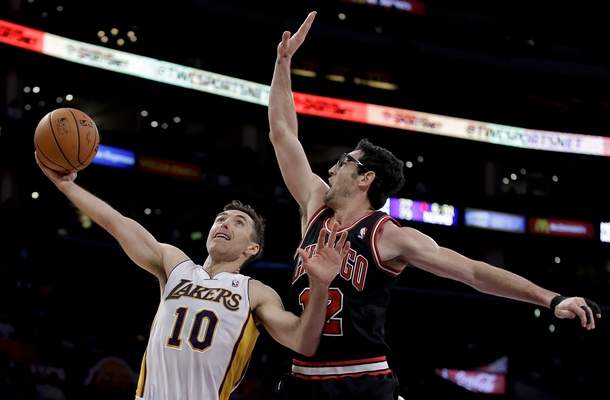 Instead of stuffing the box score with dazzling passes and swished shots both from beyond the arc and at the foul line, Steve Nash has spent his two seasons with the Lakers mostly stuffing the trainer’s room with too many ailments to count.

Lakers general manager Mitch Kupchak noted that “obviously it’s going to be a challenge” on whether Nash can return and stay on the court. But does that mean this will mark Nash’s last season with the Lakers?

By playing 10 games this season, Nash’s $9.7 million salary next season will remain on the Lakers’ books even if he is forced into medical retirement because of persistent back pain. But no NBA team can influence such a path. Lakers back specialist Robert Watkins would have had to find Nash physically unable to play. The NBA would then have a league-appointed physician confirm the diagnosis.

Still, the Lakers could waive Nash by Aug. 31 via the so-called stretch provision. Such a move would make Lakers pay the nearly $10 million owed to Nash through three seasons and ensure only $3 million counts against their salary cap annually. But the Lakers could hold onto Nash since his salary would then be completely removed from their books following the 2014-15 season.

“We have to see where we are next summer,” Kupchak said. “A lot of it is going to be based on what Steve says and what we see. If he’s out there playing at a high level and he’s working during the summer at a high level, that’ll be a factor in what we do.”

For now however, the Lakers are simply respecting and admiring Nash’s never-ending persistence in correcting the nerve damage stemmed from his fractured leg injury last season that kept him initially sidelined for 24 games. Even if Nash has averaged only 7.6 points on 36 percent shooting and 4.7 assists in 22.5 minutes, the Lakers hold out hope he’ll have a happy ending.

“This year has been a really tough year for him,” Kupchak said. “But he’s in the gym everyday and flying back and forth with his trainers. He looks great and he’s trying and working hard. You can’t hold anything agaijnst a guy that works that hard and wants it that badly. We’ll see as the weeks go on if he can get back and play. Then we’ll see what the summer brings.”