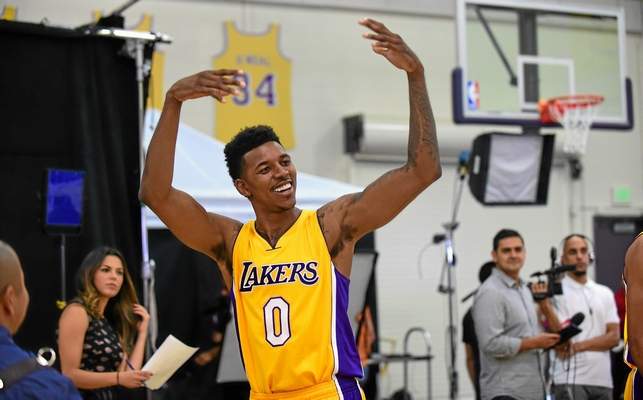 Nick Young reacts to seeing the crowd around teammate Kobe Bryant on media day in El Segundo, Calif., on Sep. 29, 2014. The Lakers open their season on Oct. 29 against the Houston Rockets. (FREDERIC J. BROWN/AFP/Getty Images file)

It turns out the unpleasant surprise for Nick Young went beyond learning he may sit out for six to eight weeks after tearing a ligament in his right thumb.

“I thought I had the day off today.” Young said, laughing.

But Young didn’t for one simple reason.

“when you hurt your hand, your feet are still okay and your legs are okay,” Scott said. “He can still do all the stuff we can do conditioning wise. It doesn’t have anything to do with a basketball in his hand.”

Young injured his hand during Thursday’s practice after trying to steal the ball from Kobe Bryant. But instead of retrieving the ball, Young’s right thumb hit Bryant’s elbow. Young later reported Bryant boasting, “I’m a man of steel” considering the contact eventually forced his teammate’s surgery. During Saturday’s practice, Young wore a brace to support his thumb. He will then have surgery on Monday with Dr. Steven Shin of the Kerlan-Jobe Orthopaedic Clinic.

Young reported Bryant and Scott were among the first to text him to offer support. But apparently there is a teachable lesson behind this.

“He was telling me, ‘Slide my feet. Don’t reach in,'” Young said of Scott. “That’s what happens when you reach in.”

Scott’s feedback and insistence that Young practice represented one of many reasons why Bryant has supported him as the Lakers’ coach. Beyond Scott serving as his rookie mentor, Bryant believes his strict demeanor will help change the Lakers’ culture.

“It says Byron don’t play that [way],” Bryant said about Scott’s demanding coaching. “He hurt his hand. He didn’t hurt his foot. It’s simple. You are able to run and do defensive slides and things that you can do from a conditioning level so you don’t lose that.”

After all, Scott had openly envisioned Young could win the NBA’s sixth man of the year award after finishing last season averaging a team-leading 17.9 points per game. Bryant had earlier touted Young as a “really big piece of this team” because of Young’s secondary scoring, better commitment to defense and improved conditioning.

So how do the Lakers handle Young’s absence that Bryant described as a “big loss”?

Scott envisioned Bryant will likely play some more time at small forward, while dismissing any notion Jeremy Lin might slide over to that spot. Wesley Johnson will still start at that position, while newcomers such as Jordan Clarkson and Wayne Ellington could see time. Injured forwards Ryan Kelly (strained left hamstring) and Xavier Henry (back spasms) still remain sidelined, though Scott believed Kelly could begin practicing as early as Thursday.

“It hurts us short term. Nick is somebody we were counting on obviously to provide that offense off the bench. We’ll have to find that elsewhere,” Scott said. “I feel badly for Nick obviously as well. He brings a lot of energy and unbelievable personality to the games. Hopefully we can get him back sooner than later and then go from there.”

But for now, Scott will still require Young to practice on drills that don’t involve his shooting hand. Scott also joked that Young could begin working on his left hand “big time.”

“It was pretty crazy,” Young said, laughing. “I thought I’d come in and get iced down. As soon as he told me to come out there and get stretched, I knew it was over for me.”