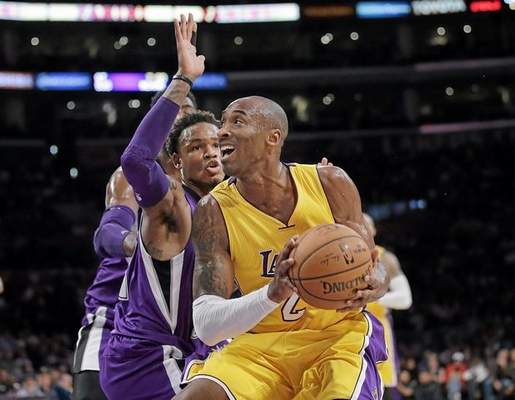 Los Angeles Lakers’ Kobe Bryant, right, looks to shoot as he is pressured by Sacramento Kings’ Ben McLemore during the first half of an NBA basketball game Tuesday, Dec. 9, 2014, in Los Angeles. (AP Photo/Jae C. Hong)

DENVER — How to maximize Kobe Bryant’s talent without compromising his health has emerged as one of biggest challenges for Lakers coach Byron Scott.

Welcome to the club.

Jackson played Bryant an average of 33.9 minutes per game in the 2010-11 season and sat him out of practices to protect his surgically repaired right knee. The Lakers and Bryant both defended this approach since his health would largely determine if they could win a third consecutive NBA championship. But after the Lakers lost in four games to the Dallas Mavericks in the 2011 Western Conference semifinals, both the Lakers and Bryant conceded his absence from practice partly disrupted team chemistry.

Brown wanted to limit Bryant between 32-34 minutes per game during the 2011-12 campaign, but he averaged 38.5 minutes so he could compensate for the Lakers’ learning curve stemmed from a new offense and a lockout-shortened season. D’Antoni planned to reduce Bryant’s workload, too. But he played Bryant an average of 38.6 minutes that season during the 2012-13 season, including a seven-game stretch where he logged 45.6 minutes per contest as the Lakers fought to secure a playoff spot. Bryant then tore his left Achilles and stayed sidelined for eight months.

Yet, Scott’s circumstances are different. The Lakers (9-22) enter Tuesday’s game against the Denver Nuggets (13-18) at Pepsi Center hardly expected to make the playoffs. Bryant is also in his 19th NBA season, averaging 24.1 points albeit on a career-low 37.2 percent shooting. The Lakers have a roster full either castoffs or unproven talent mostly on one-year deals.

How does Scott view his circumstances different in managing Bryant’s work load?

“The biggest difference is to keep him as healthy as possible so he can finish out the way he wants to,” Scott said. “I don’t want him to get injured this year or next year. I want him to play at the level that he’s accustomed to playing. In order for him to do that, I have to cut minutes.”

Bryant has averaged 35.4 minutes per game and exceeded Scott’s original 30-to-40 minute threshold three times. During those times, the Lakers faced two overtime guys and a four-day stretch between contests. Scott changed the script since then. After sitting Bryant out for three games last week, Scott played the Lakers’ star 32 minutes in Sunday’s loss to Phoenix. He also sat out of Monday’s practice and did nothing during Tuesday’s shootaround beyond receiving treatment and stretching. Bryant plans to have a light pre-game shooting session later today.

“I don’t know what they did with him in the past,” Scott said. “I don’t know what his plans were and I really don’t care. Right now I have to make sure is our plan is the same as far as making sure toward the end of the season that he feels fresh and he can go into the offseason where he can work harder. That’s hard to say with him because he works hard anyway to get ready for next year.”

Yet, Scott downplayed whether the Lakers’ struggles in securing a win has compromised his discipline at times to lean on Bryant.

“The win-loss obviously is the most important thing at the end of the day,” Scott said. “But for us the process of getting better each game, each week and each month is the most important thing right now going forward. That’s what we’ve been talking about with this process of getting back to where we feel we belong in this league and we knew it would take time. You have to be patient. That’s hard at times. You have to stick to the course. That’s what we’re trying to do.”