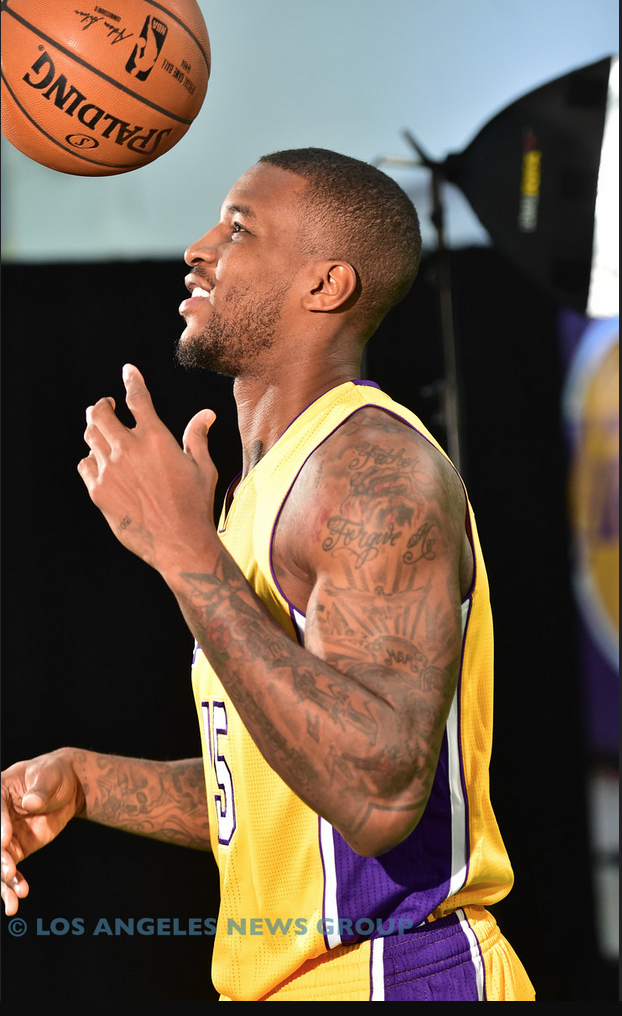 Of all the things that initially consumed himself with his first head-coaching job, Luke Walton did not think for one second about Thomas Robinson.

Walton had other things to worry about, in no particular order. How can he adjust as an assistant coach to a head coach? How will he implement Golden State’s culture with the Lakers given the talent and experience disparity between the two franchises? How much can Walton elevate D’Angelo Russell, Brandon Ingram, Julius Randle, Jordan Clarkson and Larry Nance Jr? How much can Walton revamp the Lakers’ poorly-ranked defense?

Once informal workouts started this past summer, though, Walton soon began thinking about Robinson. Every day at the Lakers’ practice facility, Robinson would arrive and perform two feats. He always exerted maximum effort. His teams usually won the scrimmages. So, Walton talked to the Lakers’ front office and both agreed about inviting Robinson for training camp.

“You assume once you get to a more structured setting, you’d see some reasons why he hasn’t stuck,” Walton said. “Bur he was great.”

The numbers may not say much. The 25-year-old Robinson averaged 2.8 points and 3 rebounds in exhibition play. But he posted those numbers in only 7.6 minutes per game while shooting 55.6 percent from the field. Robinson quickly climbed atop the Lakers’ leaderboard that calculates a players’ standing based on drills they win and if they land on a team that wins scrimmages. And Walton largely credited Robinson for often leading the Lakers in late-game comebacks.

All of which changed the Lakers’ plans heading into their season opener against the Houston Rockets on Wednesday at Staples Center.

Walton conceded Robinson “was definitely someone we weren’t planning on before training camp started.” But after Walton had numerous talks with the Lakers’ coaching staff and the front office, the Lakers kept Robinson over Chinese center Yi Jianlian and second-year forward Anthony Brown. The Lakers also found value in Robinson’s upside despite veteran Metta World Peace offering similar hustle at the same position.

“He earned his spot by bringing it every day,” Walton said, “and competing and playing with a ton of energy and getting extra possessions and all those things.”

Despite those rave reviews, however, Robinson remained restless all weekend.

He also hardly slept at all Sunday night on the eve of final roster cuts. He only felt assured of his spot once he arrived at the Lakers’ practice facility on Monday without anyone in the organization telling him to leave.

“I’m tired as hell,” Robinson said, smiling. “That was the longest ride I had to practice. Family and friends and everybody did a great job helping me not trying to think about it and worry so much. But I’m tough on myself.”

“I’m unstable. I never really [stayed] long with an organization and actually built relationships with coaches, players and teammates,” Robinson said. “I’ve been one year and gone with every team I’ve been with. That’s been hard. But it’s the nature of the business and the hand I’ve got dealt. I’m working my way out of it.”

Robinson has done that by literally working.

He often became the last player to leave the Lakers’ practice floor. On Saturday, Robinson spent about 30 minutes working after practice on his free-throw shooting and post-up moves. After speaking with reporters about surviving the Lakers’ last round of roster cuts, Robinson returned to the floor to work on the same drills. As Lakers second-year guard D’Angelo Russell observed, “he really worked his tail off.”

“That’s something I do naturally. I don’t come in the gym and work on energy,” Robinson said. “Rebounding, that’s something I have a knack for. If I can’t do anything, then I can bring energy and the other things I bring.”

Now that the Robinson has cracked the Lakers’ regular-season roster, can he bring more? He has not shown any signs of complacency. Yet, he will fight for minutes at a power forward spot that already features Julius Randle and Larry Nance Jr. Walton may feature Luol Deng and Tarik Black at that spot based on matchups.

Walton could not offer any guarantee in playing time. But he brought up Robinson’s readiness and efficiency anytime he inserted him in the lineup. That might happen in the regular season amid unexpected injuries or when teammates need a quick breather. Nonetheless, Walton also liked Robinson’s engagement level during timeouts and on the bench.

Meanwhile, the Lakers boast another quality that appeals to Robinson’s hopeful trajectory after posting modest career averages in points (4.9) and rebounds (4.8).

“They’re younger. I was behind a lot of good players early on in my years. There wasn’t much time for teaching,” Robinson said. “If there was, I had a lot to learn myself. I had a lot to learn. Here everybody has to catch up and find who they are. I fit right in in figuring out which way I’m going to go in my career.”

On Monday, Robinson’s took one step forward to his career. But he rightfully considers it a small step, leaving him with no reason to stop this early.

“I made the team but nothing is done yet. I shouldn’t have been in that position,” Robinson said. “But things happen the way they happen. I work my way out of it. Now I have to keep going.”

Lakers also depending on veteran players to mold young core