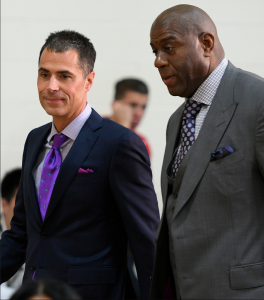 Lakers president of basketball operations Magic Johnson appeared AM570’s “Roggin and Rodney” on Monday to discuss the state of the team. Johnson on whether there will be offseason changes: “I wouldn’t say a lot of changes, but there’s going to be some changes. Photo by John McCoy/Los Angeles Daily News (SCNG)

Whenever their season ended without a champagne bath in the locker room and a parade through downtown Los Angeles, the Lakers typically asked themselves a simple question. Why did they not win the NBA championship?

The Lakers hardly just fell short of reaching that goal. They missed the playoffs for the fourth consecutive season after finishing with a 26-56 record, the third-worst mark in the NBA. That partly explains why Lakers governor Jeanie Buss hired a former Hall-of-Fame Lakers (Magic Johnson) and a respected sports agent (Rob Pelinka) to oversee the front office. Nearly two months into that job, they have tried to seek clarity on a significant question.

Do the Lakers show patience in their young roster, or do they break it up in pursuit of more veteran players?

All of which leaves the Lakers tackling a complicated question. Do they need to clean house or just revamp the culture?

Johnson and Pelinka made those initial steps as they observed practice and watched film to evaluate players for their performances and work habits. They consulted with players occasionally with the blessing of Lakers coach Luke Walton. They also held exit meetings last week in which they harped on every player about reducing their body-fat percentage, while also outlining individual goals for each player. That process will continue on Tuesday when they meet with second-year point guard D’Angelo Russell.

“We feel good about the young core,” said Johnson, which includes Brandon Ingram, Julius Randle, Jordan Clarkson, Ivica Zubac, Larry Nance Jr. and Tarik Black. “They still have to learn how to win and also hate to lose. That’s how we have to grow. Again, we have talented guys. But they all need to improve and get better. So I’m excited about the young players we do have and I’m excited about Luke as the coach. But we have to play harder.”

After all, the Lakers finished 28th out of 30 NBA teams in points allowed (111.5), last in defensive field-goal percentage (48.3) and 30th in fast-break points allowed (16.2). Johnson conceded he found issue with the Lakers’ overall effort level even when accounting for the team’s collective inexperience. So despite Johnson’s tempered expectations on if the Lakers will light off fireworks in July during free agency, he plans to lead a full-court press.

Why Lakers view Luke Walton as a ‘players’ coach’