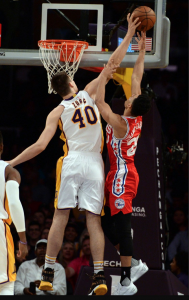 EL SEGUNDO – Even as he nursed confidence in his game perhaps as big as his 7-foot-1, 240-pound frame, Lakers rookie center Ivica Zubac also entered his first season in the NBA trying to be realistic.

He had no clairvoyance he would dominate in summer league and quickly become a fan favorite. He had no sense he suddenly he would become the Lakers’ starting center. He could hardly predict he would work for his childhood idol, Magic Johnson.

In a season that ended in disappointment with the Lakers (26-56) heading to the NBA lottery instead of the NBA playoffs for the fourth consecutive year, Zubac gave the Lakers reason to feel optimistic about their future. After showing growth with a fundamentally sound post game, emerging jumper and quest to improve, Zubac sounded firm on whether he thinks he could become the Lakers’ starter for the 2017-18 season.

The Lakers have offered more uncertainty on if Zubac’s dream will become a reality.

When the Lakers shut Zubac down for the final seven games because of a high right ankle sprain, Lakers coach Luke Walton left it open-ended on whether Zubac has shown enough to take the starting center spot. After experiencing frustration with limited production and sitting the last 19 games because of healthy scratches, Lakers veteran center Timofey Mozgov said he expects to start next season. Though his reasoning partly stems from wanting to play, Mozgov also argued Zubac is not ready to start, either. Mozgov argued there marks a difference between starting for development purposes over starting in games more measured by results.

Though the Lakers have not determined that pecking order, they have determined what they think of Zubac.

After the Lakers selected Zubac 32nd overall in the 2016 NBA draft, president of basketball operations Magic Johnson and general manager Rob Pelinka outlined to Zubac in specific detail what they liked about his game.

“They think I had a really good rookie year,” Zubac said. “My attitude and confidence, they love it. They expect me to continue working hard and try to improve in every area of my game and every aspect. Just being positive and working hard.”

Zubac smiled as he said those words. Who could blame him? Consider his thoughts when he pulled into the parking lot of the Lakers’ practice facility last week for his exit meeting.

“‘Oh man, I’m parking my car next to Magic’s car.'” Zubac recalled thinking. “It’s pretty cool to see Magic every day and work with him on a daily basis. I’m living the dream.”

To ensure Zubac does not wake up from his dream, he will devote most of his summer toward improving his game.

After finishing rehab on his right ankle this week, Zubac plans to return to Croatia to recharge for the next three weeks. Then, he will return to Los Angeles to train for the rest of the offseason. Then, Zubac plans to shed more weight and gain more strength so he can improve defensively “100 times more” in rotating side to side and adjusting to pick-and-roll coverages. With that, Zubac expects his conditioning to sharpen. And both in practice and Las Vegas Summer League, Zubac hopes to build on his post-up game and emerging jumper.

That way, the Lakers could fulfill the expectations Johnson and Pelinka outlined in Zubac’s exit meeting.

“Next year, we want to go in the playoffs,” Zubac said. “We can’t have anymore seasons like this. We should be all working hard this summer so next season we can achieve that goal.”

Whether the Lakers can achieve that goal could depend on Zubac’s readiness to start on a full-time basis.

“I always had confidence in myself. I always knew I can play on this level,” Zubac said. “The only concern was if I was going to get a chance. After I got my chance, I was confident and knew I was going to do well. I earned my opportunity. But they were the ones that believed in me and gave me a chance. So all I did was play my game.”

How Lakers helped Tyler Ennis feel comfortable in his role