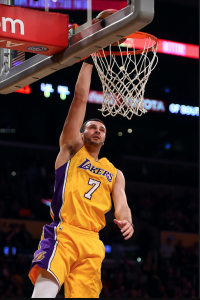 The Lakers’ Larry Nance Jr. (7) dunks the ball during their game against the Bucks at the Staples Center in Los Angeles, Friday, March 17, 2017. (Photo by Hans Gutknecht, Los Angeles Daily News/SCNG)

EL SEGUNDO — As Lakers general manager Rob Pelinka outlined the “pursuit of excellence,” Lakers reserve Larry Nance Jr. spent his exit meeting coming up with a litany of items he wants to check off his bucket list.

That includes addressing an issue the Lakers have strongly lacked in recent seasons with either Mike D’Antoni (2012-14), Byron Scott (2014-16) or Luke Walton (present) patrolling the sideline.

The Lakers recently have not had the ability to excel defensively. Last season, the Lakers ranked 28th out of 30 NBA teams in points allowed (111.5), 30th in defensive field-goal percentage (48.3) and 30th in fast-break points allowed (16.2). According to NBA.com, Nance ranks 160th out of 482 players in defensive efficiency while allowing opponents to shoot 46.6 percent from the field.

Still, Nance said the Lakers’ front office considered his off-ball defense “an area of strength.” To improve his on-ball defense, Nance plans to do a few things. He will study tape of Golden State’s Draymond Green and San Antonio’s Kawhi Leonard. Nance will also train this offseason with his father, Larry Nance, who had a 13-year NBA career with the Phoenix Suns (1981-88) and Cleveland Cavaliers (1988-1994).

“I kind of got the sense that if you’re not all in, this might not be the place for you,” Nance said of his exit meeting last week with the Lakers’ front office. “I’m super excited. I know I can’t wait to work.”

That work has already started. Nance planned to spend the first two weeks of the offseason in his hometown of Akron, OH both to be with family and to train with his father. Nance is not expected to play on the Lakers’ summer league team, which is something NBA players entering their third season rarely do. But he will spend plenty of time at the Lakers’ practice facility sharpening his craft.

Despite the Lakers’ poorly ranked defense, Lakers coach Luke Walton often praised Nance’s defensive hustle, communication and willingness to call out teammates for any mistakes. The Lakers also saw defensive improvement as they won five out of their last seven games while Nance started at center amid Ivica Zubac’s season-ending injury to his right ankle.

“I just tried to be back there quarterbacking everything,” Nance said. “I was trying to call everything out and help with different switches and help defense. I tried to be all over the place. Obviously it wasn’t just me. Everybody kind of bought into it and got into the mindset that if they score on you, they score on us. If they score on me, it’s on all five of us.”

After missing 16 games because of a bone bruise in his left knee, Nance said he is “not worried about any of that whatsoever.” But Nance said he will follow an offseason program that will help strengthen his core, quad and hamstrings for injury prevention purposes.

“With the way that I jump, there’s a lot of force being put on joints and stuff like that,” Nance said. “The better I can protect them, the better I can be.”

The better Nance will also be if he continues to expand his game to complement his penchant for hustle plays and dunking. He sounded optimistic that will happen, citing the growth Clippers forward Blake Griffin has taken in morphing from a dunker to more of a complete player. The Lakers talked with Nance about takinge advantage of smaller defenders that switch on him. So Nance plans to consult with his dad on developing a go-to move where “80 percent of the time it will go in.”

Nance also believes he can become a more dependable outside shooter. Though he only shot 27.8 percent from 3-point range in the 2016-17 campaign, Nance still showed improvement after making only 10 percent of his 3-point attempts during his rookie season.

“I’m glad they told us to let them fly,” Nance said. “We were shooting them until we were blue in the face in practice. Just getting reps, reps, reps. But you can shoot them all you want in practice. It’s not like a game shot. Getting the opportunity to shoot some and being confident about it has done quite a bit for me.”

It remains to be seen when and how Nance looks as a finished product. That leaves Nance with a busy summer, including working toward reaching his goal in becoming an elite defensive player.

“I grew a lot in a lot of different aspects,” Nance said. “But at the same time, there’s still worlds of room for improvement.”