There can be a fine line in scheduling for high school sports teams between scheduling easy enough for the team to get some confidence and hard enough for them to be challenged.
But, if you’re not really concerned with one of those two sides of the coin, it makes it a bit easier.
Grand Terrace girls soccer at 5-6-3 already has twice as many losses as it had all of last season, when it went 21-3-3, but was ousted in the second round of the CIF-SS playoffs.
Coach Ryan Pacheco isn’t concerned about the team’s confidence. Nearly all of the key players from last year’s team are back this year, so confidence isn’t an issue. He wanted the team to be challenged, so he upped the schedule. 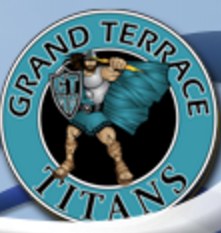 It’s not that last year’s was easy, and it wasn’t a complete overhaul, but he wanted to upgrade. Truthfully, the poor record is due in part to the Titans not fielding its starting 11 for any game this season, until Wednesday’s showdown with No. 1 Bloomington. The game is at Bloomington at 5 p.m.
“I told the girls in 14 games played, don’t expect to be 14-0,” Pacheco said. “The schedule has provided us a chance to see what we can do.”
Because of injuries and other absences, Pacheco and his staff have gotten a chance to see a lot of players play who wouldn’t normally have played.
“I’m pleased with where we’re at,” Pacheco said. “It helps us out to see subs for the girls that normally wouldn’t be starting for us. It’s a huge confidence boost. We know they can hold their own.”
Pacheco isn’t concerned with his team’s record, and also isn’t concerned with his team’s ranking. While the record isn’t good, the ranking is just fine.
Despite its sub-par record, Grand Terrace is ranked No. 3 in CIF-SS Division 6, behind No. 1 Bloomington and No. 2 Lake Elsinore Temescal Canyon.
“The people that do the polls, they understand us,” Pacheco said. “It (schedule) is something people take into account.”
Both Grand Terrace and Bloomington have played Temescal Canyon. Bloomington defeated Temescal Canyon 3-0 on Dec. 8, while Temescal Canyon defeated Grand Terrace 2-0 on Dec. 15.
That being said, Pacheco expects the game against Bloomington to be close.
“Personally, I think it’s a toss-up,” Pacheco said. “I would be surprised if it’s a blowout.”

A year ago, Grand Terrace won 2-1 and the teams tied the other game 0-0, Grand Terrace’s only league blemish. In three years, only one of six games between the teams has been decided by more than one goal.