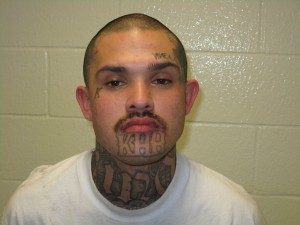 AZUSA >> A gang member with a lengthy criminal record who was released from earlier this month under AB 109 guidelines was back behind bars Sunday after being caught with a stolen and loaded handgun, police said.
Officers chased down and arrested Anthony Joseph Zepeda, 23, of West Covina about 11:30 p.m. Friday after he ran from officers and discarded a handgun in the 700 block of South Donna Beth Avenue, according to Azusa police officials and Los Angeles County booking records.
Two officers noticed two “suspicious” men standing near a parked car, Sgt. Andy Sutcliffe said in a written statement.
“When the officers began investigating, the men split up and ran in different directions,” Sutcliffe said.
Zepeda jumped residential fences and ran through backyards before officers captured him, the sergeant said.
“Officers learned while running from them, he through a 9mm handgun on the roof of a residence,” he said. The gun, which was loaded with 10 rounds of ammunition, had been reported stolen in Glendora.
The second man who also fled from police was not found.
According to police and booking records, Zepeda was released from county jail Jan. 13 under the guidelines of AB 109, also known as California’s 2011 Public Safety Realignment. The legislation shifts custody and post-release supervision of convicted felons from state prisons and parole agents to county jails and probation departments.
He was released after serving less than three months of a six-month sentence he received in October of 2014 for violating his probation, records show.
Zepeda, who wears the name of area street gang “KHA” or “Kings Have Arrived” tattooed on his chin, has an extensive criminal history dating back to 2010, according to Los Angeles County Superior Court records.
KHA began as a tagging crew, officials said. The group was declared a criminal street gang by prosecutors in 2008 after two of it’s members were linked to the fatal 2007 shooting of a 14-year-old boy and his father in front of their Baldwin Park home.
Zepeda’s previous convictions include drug possession in 2010 and 2014; possession of drug paraphernalia in 2010 and 2012; being under the influence of drugs in 2011; fleeing police in a vehicle in 2011; and domestic battery in 2011 and 2014, court records show.
Zepeda was being held without bail pending a scheduled appearance Tuesday in West Covina Superior Court.