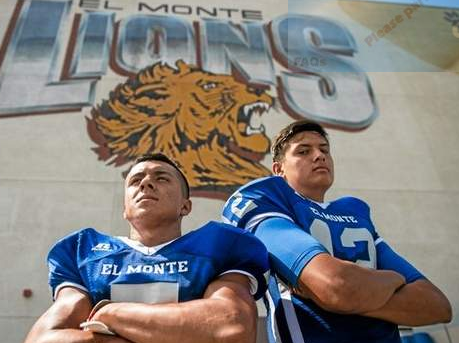 High expectations and El Monte High School never used to be found in the same sentence.

For far too long, the Lions were an area also-ran. The playoffs were a rare occurrence and you can forget about winning the Mission Valley League championship. But all of that has changed.

“People want to play,” Sanchez said. “They want to be a part of it. It’s fun. Once the kids buy in, they’re 100-percent sold. We matter. We’re not just an afterthought like we used to be. You love us or hate us, it is what it is.”

After being a doormat for so long, El Monte broke through in 2011. The Lions won a share of the Mission Valley League championship for the first time since the late 1970s and followed it with their first playoff win in as many years when they edged Montebello in a last-second thriller.

What was thought to be a once-in-a-generation team back in 2012 has actually proven to be a catalyst. Sure, El Monte followed that season by winning only one game in 2013. But last year, the Lions bounced back, won six games and finished second in league.

With so many key players back from last year’s team, El Monte is once again a legitimate league title contender. The Lions have some of the top skill players around in running back Roy Barajas and quarterback Edward Dominguez.

“I wasn’t pressing the panic button,” Sanchez said about the 2013 season. “But it was tough. It was one of those dark years. I think we just go through a little dry spell here and there and that was one of them. People thought we had our big year and now we’re done, but I knew we’d be okay.”

The reason why Sanchez can be so confident that things will always turn around is because his program now has a foundation under it. Sanchez, an El Monte graduate in 1997 before going on to play linebacker at Azusa Pacific University, knows exactly what type of student athlete he’s working with because he was once a El Monte football player himself.

Then there’s what Sanchez calls “the little things.” It’s not uncommon to see the Lions football players jogging around town in their cammoflauge shorts while stopping at local businesses and city buildings to get acquainted with what they hope are their fans.

El Monte traditionally rocks some of the best spirit pack gear around, affordable only by extensive fund raising. But Sanchez wants his players to look the part and the kids are all too happy to wear it.

The team barbecues steaks on Fridays for team meals and often has offseason barbecues just because. There’s also a popular trip to Mammoth Lakes made every summer for just the team captains and coaches. Once far from home, the captains and coaches lay out their goals for the upcoming season.

Sanchez has seen those goals change through the years from things like beating rival South El Monte to winning the league championship. This year, the big desire is to beat Rosemead, which is the defending league champ and has owned El Monte recently.

“The expectations are a lot higher,” Sanchez said. “I told them they can be that team that gets to the second or third round. But I think them knowing what we’re capable of, it definitely helps.”

On Friday, Montebello will come to El Monte looking to spoil the party. The Oilers may not have any players who played in that heartbreaking 2012 loss, but the coaching staff definitely remembers. Sanchez knows opening the season with a team like Montebello can send a big message, win or lose.

“I tell the kids it’s like a playoff game,” Sanchez said of Friday’s game. “We’re playing a team that’s going to be in the playoffs and is going to compete. And we’re going to get smacked in the face. I told the kids that Montebello is going to come out swinging. They’re not going to be soft.”