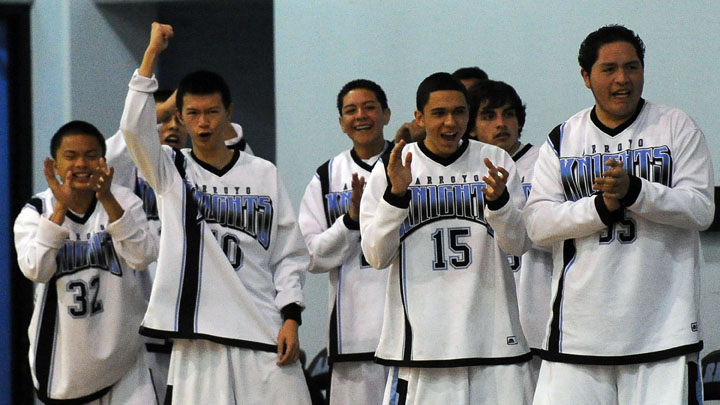 “The kid’s nails,” Arroyo coach Carlos Barajas said of Gomez. “He works his butt off to do the things he does.”

All Arroyo needs to win its first league title since 2007 is one win or a Gabrielino loss with three games to play.

Gomez shared league MVP honors last season with Gabrielino’s Tyler Shimamoto. The two of them put on a show for a stretch of the third quarter on Wednesday, getting into a tit-for-tat duel with Shimamoto scoring and Gomez answering.

Gomez eventually kept on scoring and finished it off by getting fouled while making a 3-pointer with three seconds left in the third quarter. Gomez’s free throw put Arroyo up 55-38 entering the fourth quarter, but Gabrielino was not done.

Shimamoto scored 10 points in the fourth quarter and the Eagles chipped away at Arroyo’s lead while the Knights were all too willing to help them out with several unforced turnovers.

The closest Gabrielino got was 63-58 after Bryan Phan banked in a 3-pointer. But Arroyo iced the game at the free-throw line.

“I wasn’t worried, but I thought for a quick second `Here we go again,”‘ Barajas said of Gabrielino’s run. “That’s how they beat us before in the past. That’s why I called timeout; to slow it down, make sure we made better decisions and close it out.

“We knew at the start of the year that we had to get through Gabrielino. They’re the three-time defending champ, and us getting that win early over there put us in a good spot here.”

Shimamoto finished with 21 points. The Eagles also got 13 points from Eli Peters. Edgar Luperico, who scored 11 points, was the only other Arroyo player beside Gomez to finish in double figures.