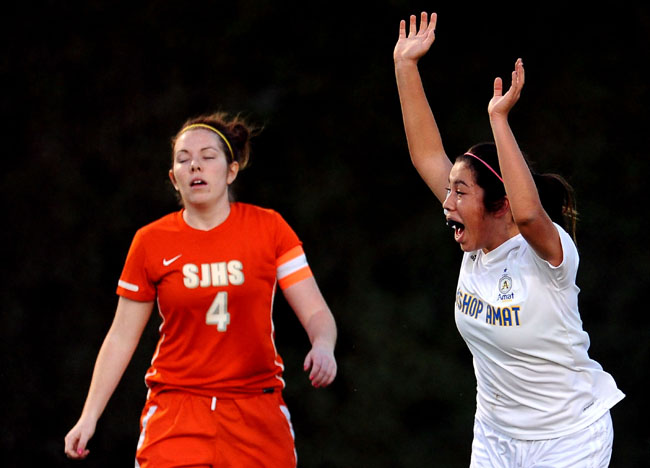 By Fred J. Robledo, Staff Writer
The Bishop Amat girls soccer team might not be as powerful as the team that won the CIF-Southern Section Division 3 title in 2011 or the one that advanced to last year’s championship game, but don’t tell the Lancers they’re not contenders anymore.
They think they’re and went out and showed why.
Feeling snubbed after being left off this week’s Division 3 poll, Bishop Amat responded with a 1-0 victory over second-ranked St. Joseph on Wednesday, avenging a 3-2 loss to the Jesters earlier in the season.
“It was a big win,” Amat midfieder Jazmin Montoya said. “We have hard workers and players who want to win. We’re not the most talented team as we have been, but we’ll work as a team to win.”
The victory moves Amat (12-4-5, 5-1) and St. Joseph’s (16-4-4, 5-1) into a first-place tie in the Del Rey League with two games left.
Both teams had opportunities in front of the goal, but Amat had better opportunities on set pieces, trying to convert long throw-ins and corners.
Finally, in the 67th minute, Amat’s Cassadra Reyes took a pass and darted down the left side, crossing a ball in front that senior Kathleen Zamora headed home for the lone goal.
“I saw Cassie go down the line with the ball and me and Jamie (Peters) went for it,” Zamora said. “It just went straight to my head. It was perfect.”
As the game wore on, Amat coach Ruben Gonzalez wondered if the game winner would ever come.
“It was a battle,” Gonzalez said. “They’re a good team, we knew that coming in.
“We just stayed patient and kept after it. After the goal, there was 12 minutes left. At that point you just defend the goal.”
St. Joseph’s forwards Natalie De Leon and Jenna Pillon struggled to get quality opportunities. But all the Jesters needed was a tie to stay ahead of Amat in the league title chase.
They almost got it.
“The late goal is tough to give up but we had our opportunities the first half and couldn’t (finish),” St. Joseph’s coach Eddie Perez said. “We had about 10 (chances) right in front of the goal and couldn’t get anything to go.
“That gave them (Amat) confidence and they came out and played well in the second half.”
For Gonzalez, the end of season confidence is just what the doctor ordered.
“We always start out a little slow and pick it up toward the end of the second half of the season,” Gonzalez said. “It’s about getting ready for the playoffs, that’s was this program is about.
“League championships are nice, but it’s how you do in the playoffs is how this team will be compared to teams in the past.”