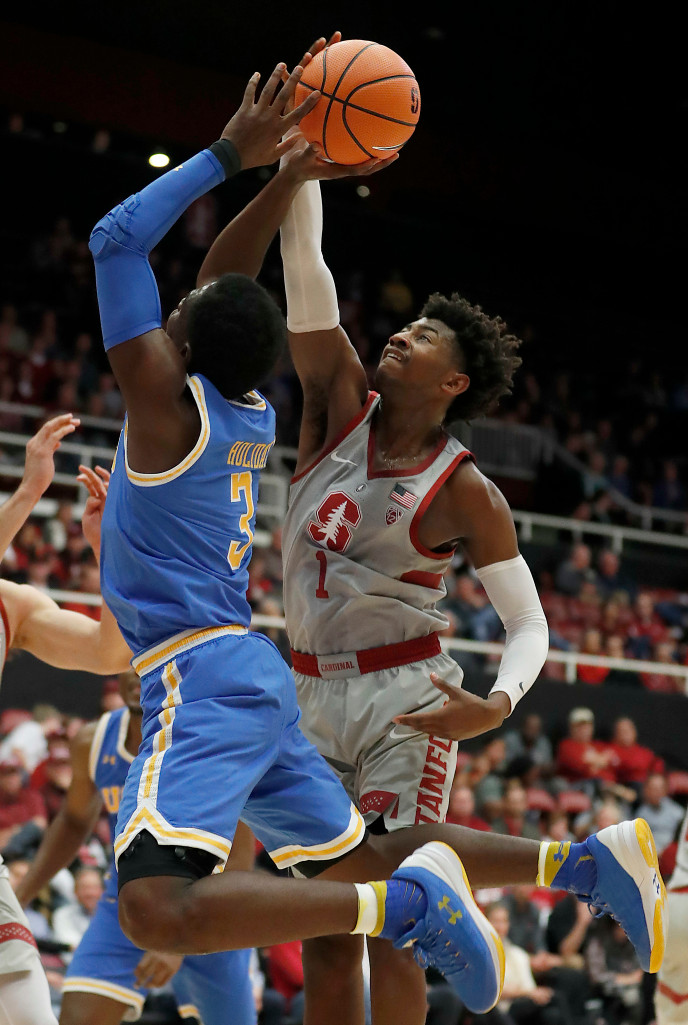 UCLA made the mistake of blowing a double-digit second-half lead in its first road game of the year at Michigan. Then the Bruins did it again against Stanford.

After leading by 13 with 9:12 to go in regulation, UCLA lost to Stanford 107-99 in double overtime in Maples Pavilion on Thursday.

Guard Aaron Holiday had 29 of his 31 points after halftime, including a game-tying, buzzer-beating 3-pointer that sent the game into its second extra period, but Stanford’s Dorian Pickens outdid the UCLA junior with two critical 3-pointers of his own and 26 points.

Pickens drained the game-tying basket with five seconds left in regulation and the go-ahead 3-pointer with 1:55 left in the second overtime as the Cardinal (7-8, 1-1 Pac-12) scored the game’s final nine points. The senior guard was 6-for-11 from beyond the arc while no other Stanford player made more than one 3-pointer.

The Bruins (11-4, 2-1 Pac-12) missed 14 free throws in the second half and overtime periods, including five straight at the end of regulation.

After shooting 78.6 percent at the free-throw line over the past four games, UCLA reverted to its early season form and shot just 54.3 percent against the Cardinal.

The Bruins have now taken second-half double-digit leads during both of their true road games to only lose in overtime. Michigan overcame a 15-point lead and Stanford, which entered Thursday’s with losses to Long Beach State, Portland State and Eastern Washington, overcame a 13-point lead in less than 10 minutes.

Stanford completed the comeback without its leading scorer as Reid Travis fouled out with 2:22 left in the second half.

The Bruins will try to salvage the road sweep against Cal on Saturday at 3:30 p.m. PT in Haas Pavilion.