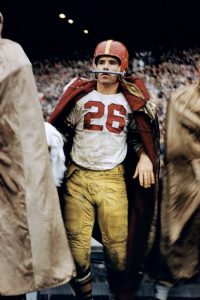 For a lot of USC fans who witnessed Trojan football in the 1950’s, there was not a finer player than halfback Jon Arnett. An All-American, Arnett was a two-time winner of the Voit Award, which went to the best player on the Pacific Coast. He was the No. 2 pick in the 1957 NFL draft and selected by the Los Angeles Rams, where he was a five-time Pro Bowl. He also is in the College Football Hall of Fame. And today, Arnett celebrates his 82nd birthday.