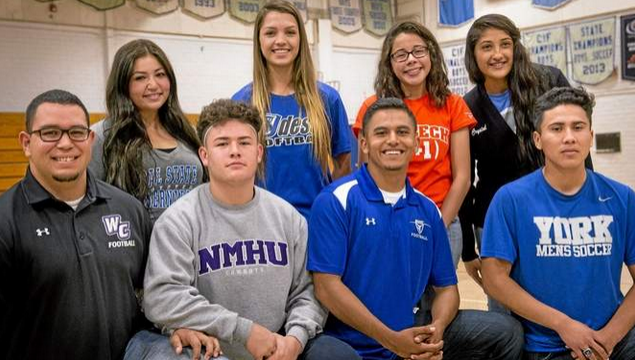 PICO RIVERA — El Rancho High School enjoyed its best football season in nearly two decades this past fall, and three of its stars were rewarded Thursday for that effort. Quarterback Andrew Perea, receiver Richard Cuellar and linebacker Adrian Palacios signed letter of intent to their respective college choices. Perera with Concordia, of Nebraska; Cuellar with New Mexico Highlands and Palacios with nearby Whittier College.All were part of a ceremony in the school’s gym, along with boys soccer player Francisco Miranda (York College, Nebraska); softball players Destiny Cervantes (Odessa College, Texas) and Jacquelyn De Loza (CS San Bernardino) and track athletes Melissa Gutierrez (CalTech) and Crystal Rodriguez (Biola).Perea was Whittier Daily News Player of the Year after accounting for 3,103 yards and 34 touchdowns to lead the Dons to an 8-3 record and their first league title in 18 seasons. He was also Del Rio League Player of the Year and first team All-CIF-Southern Section Southeast Division.
“It’s a great place,” Perea said. “I’m going to get the best out of myself and get a great education.
“I’m going to play quarterback, and they run the spread much like we did here, so hopefully I will continue to do things like this past season.”
Palacios, who had 106 tackles, 12 for a loss, was WDN Defensive Player of the Year and first team All-Southeast Division.
“It’s a great opportunity,” Palacios said. “The coaches have really helped me out. Whittier College is very expensive and the coaches got me (funding), which I appreciate.”
Cuellar was one of the top receivers in the area, with 71 receptions for 660 yards and seven touchdowns. He was first team all-area.
“I got the opportunity to play football at New Mexico and get an education,” Cuellar said. “That’s pretty good. It’s a good opportunity that I couldn’t pass up. “
De Loza was the latest signee for Cal State San Bernardino, which is now coached by former St. Paul coach Jim Maier.
CAL DUO SIGN COLLEGE LETTERS
California football players Adam Satti and Nathan Gudino also signed college letters on Thursday.
Satti, who passed for 1,604 yards this past fall, signed with Knox College, of Illinois. Gudino with Mount Ida College, of Massachusetts.