The Angels’ 10-9 win over the Seattle Mariners was fun for a night. As I pointed out in my game story, they did something that no team had never done, beating Felix Hernandez after falling behind by seven runs.

Because it was such an anomaly it’s hard to extrapolate any long-term, big-picture ideas about what the win means for the Angels. Mike Scioscia tried.

“Hopefully it’ll inspire you the next time you’re down by two, three runs at any time in the game to just keep playing baseball. Hopefully that experience for some of the young guys out there — you just have to experience it, understand it.”

Take a step back and you can maybe draw some conclusions from the four-game series, which the Angels should have swept if not for Tuesday, when Josh Hamilton went 0 for 5 with three double-play groundouts. Monday they won with power (11-3), Tuesday was Tuesday, Wednesday they won with speed, Thursday the Angels won with a big comeback, two home runs and 15 singles, an interesting mix.

Toss out Tommy Hanson‘s dud Thursday and the pitching was great. That’s what you would expect against a Mariners team that was hitting a collective .234 before Thursday’s eight-run outburst, though the Angels have had trouble putting away bad teams this season.

There were no truly embarrassing/critical errors in the field, though Hamilton seemed to get a late jump on Kyle Seager‘s double in the eighth inning — a ball that quite nearly bounced under his glove for a triple or inside-the-park homer.

Maybe there was some symbolic value in gaining a 3-1 series win Thursday, rather than accepting a 2-2 split after falling behind so far so early against the Mariners’ ace.

Thursday was Mike Trout‘s second four-hit game of the season and his best game at the plate since he hit for the cycle against the Mariners last month. His brilliant eighth-inning at-bat served as the game’s final turning point. It ended in a single, ended Carter Capps‘ night, and forced the Mariners to use their fourth pitcher of the night, Yoervis Medina.

Medina went on to walk Mark Trumbo (intentionally) and Alberto Callaspo (unintentionally). The latter forced in the go-ahead run.

“We got down seven early, kept scratching, put one up, two up, then we had that big inning,” Trout said. “That (fifth) inning we were putting great at-bats together, getting pitches to hit and we weren’t missing them. … We’ve got to come out tomorrow with that same mentality.”

Take another look at the Gameday view of Trout’s at-bat against Capps: 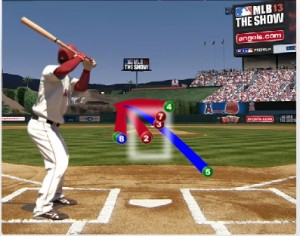 Trout started this season somewhat slowly, but after a strong series at the plate and in the field, those struggles are clearly behind him. He’s Rookie of the Year Mike Trout again, 10.9-WAR Mike Trout again.

The Angels were 0 for 22 with runners in scoring position before Albert Pujols‘ single in the fifth. Can they do this more often, against teams with better top-to-bottom pitching? A good test comes this weekend in the form of Gerrit Cole and the Pittsburgh Pirates.

Among the hitters, only Josh Hamilton is truly cold. The Angels can live with that.

The standings picture is somewhat moot. The Angels began the week a half-game behind the Mariners, in fourth place. Now they’re in third, 1 ½ up on Seattle and 9 games back of first-place Oakland. The Angels and Mariners are close enough that they could conceivably swap spots again over the weekend. Stranger things have happened.

But you got the sense that these teams are headed in opposite directions. You have to wonder if Seattle’s “epic collapse” will cost manager Eric Wedge and others their jobs.

These are the things you wondered about the Angels a month ago. So yes, it seems like Scioscia is safely off the hot seat.