Angels manager Mike Scioscia wouldn’t commit to Joe Blanton taking his next scheduled turn in the rotation Saturday in Oakland.

“We’re working on a couple of things now and we’re going to see where we are,” Scioscia said.

Blanton has allowed more home runs (24) and hits (157), and lost more games this season (13), than any major-league pitcher. Monday’s loss was the 10th game, and fourth in a row, in which Blanton has pitched fewer than six innings and allowed more than three runs.

“It’s about throwing good strikes,” Scioscia said. “I think he’s either yanking some fastballs into some hitting areas, or maybe he’s just missing with some of his pitches and getting into some tough counts. When he’s really good, he’s controlling counts and pitching to contact on his terms. He made some adjustments about four or five starts ago, and it looked like he was getting better fastball command. But he obviously doesn’t have everything together like he needs to. He’s working hard with Mike to find the consistency that he needs to repeat pitches, and it’s been a struggle for Joe.”

Fox Sports Networks will produce these games for distribution by local Time Warner Cable systems to its customers, which will air locally on channel 858.

The Angels’ broadcast team will feature Amaury Pi-Gonzalez providing the play-by-play and Jose Mota with commentary and analysis. Here’s the complete schedule:

END_OF_DOCUMENT_TOKEN_TO_BE_REPLACED

Not long ago, fans voted online to determine who is “The Face of Major League Baseball.” The winner, of course, was Joey Votto.

Wait, you didn’t remember who won the most important bracket of March?

Votto’s victory vindicated his small-market heroics but it couldn’t land him in a national television advertising campaign called “I Play.” The five faces MLB chose for the campaign: David Price, Andrew McCutchen, Robinson Cano, Bryce Harper and Angels outfielder Mike Trout, whose video spot is linked above. (Apologies to the entire Midwest are in order.)

It’s another drop in the growing tide of Trout’s national celebrity. This off-season, he was featured on the cover of ESPN The Magazine, GQ and Men’s Health. You have to figure that he’ll get more exposure before he gets less. Ryan Seacrest seems to agree.

It’s also a refreshing affirmation that it’s possible to be a star simply by being really good at what you do. Trout isn’t as flashy as Harper, doesn’t play in as large a market as Cano, and hasn’t had as much time to establish himself as Price or McCutchen. He’s just a really good baseball player — maybe the best in the game — albeit one with a .313 on-base percentage (if you want to hold up his three-game sample size from 2013).

Playing in Los Angeles of Anaheim helps, too.

The Angels are playing the Texas Rangers in Arlington in about 10 minutes. Onto the bullet points:

END_OF_DOCUMENT_TOKEN_TO_BE_REPLACED 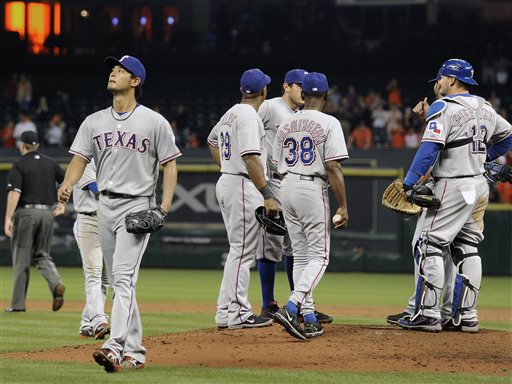