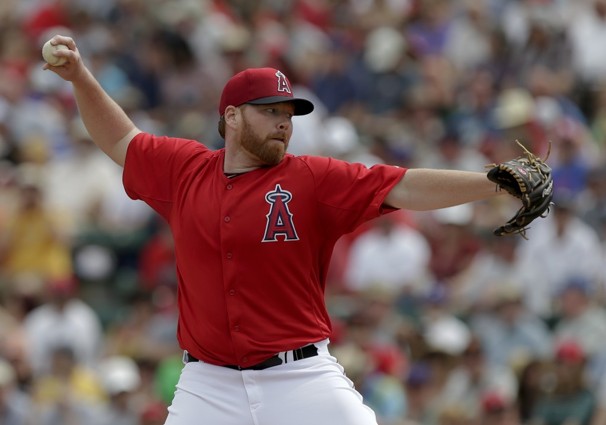 Tommy Hanson starts for the Angels tonight against the Toronto Blue Jays.

The Angels are carrying 13 pitchers and only three position players on their bench. The unusual configuration began 10 days ago, when pitcher Tommy Hanson was activated from the disabled list and infielder Brendan Harris was designated for assignment.

The Angels carried one extra pitcher for parts of the first half too, particularly when the bullpen was being overused by manager Mike Scioscia‘s standards. It was out of necessity — the Angels’ starting pitchers rarely lasted beyond six innings — and that’s the case again.

“I’m more comfortable that way than being short on the pitching side,” Angels manager Mike Scioscia said. “Until we get our rotation — some guys — lengthened out, it was really important what Garrett (Richards) did last night and what Jerome (Williams) did the time before too, to try to reset some things and get guys where they need to be.”

Hanson is scheduled to make his 12th start of the season tonight, and just the third since he returned from the disabled list with a strained right forearm. In his last two outings, Hansen threw 5 ⅓ and 4 ⅔ innings, respectively. So there are some concerns about how deep into the game he’ll go. Scioscia said that Hanson’s pitch count will be “a little limited.”

Ideally, the Angels will go back to a four-man bench when Peter Bourjos (fractured wrist) is activated from the disabled list. That could be as soon as next week.