The recently closed Lanterman Developmental Center could go from the control of the state’s Department of Developmental Services to that of Cal Poly Pomona.

According to the 2015-2016 Governor’s Budget Summary, the 302-acre Lanterman property would be transferred to Cal Poly for academic purposes and to expand its Innovation Village development.

“The transfer is contingent on CSU acknowledging that state funds will not be specifically appropriated for the operation, maintenance or development of this property; and the University accommodating the needs of other state departments for a portion of the land in the area,” according to the budget summary.

Before Cal Poly can take possession of the Lanterman property, the Legislature must approve and adopt the budget, said Emily Velasco, Cal Poly spokeswoman.

“We’re hopeful and we’re in negotiations with the state, but it’s not anything definite,” Velasco said. “It’s really up to them at this point.”

For more than eight decades, the Lanterman Developmental Center was home to people with developmental disabilities.

Lanterman closed due to several factors, including the potential cost of infrastructure improvements required by state and federal governments.

Velasco said in the current negotiations, the state is negotiating on behalf of the California Highway Patrol, the California Air Resource Board and the California Conservation Corps, all of which would like use of portions of the Lanterman property.

The CHP uses a building on the property, said Nancy Lungren, spokeswoman for the state Department of Developmental Services, which operated the developmental center and is still in charge of maintaining and caring for the property until the end of the current fiscal year. 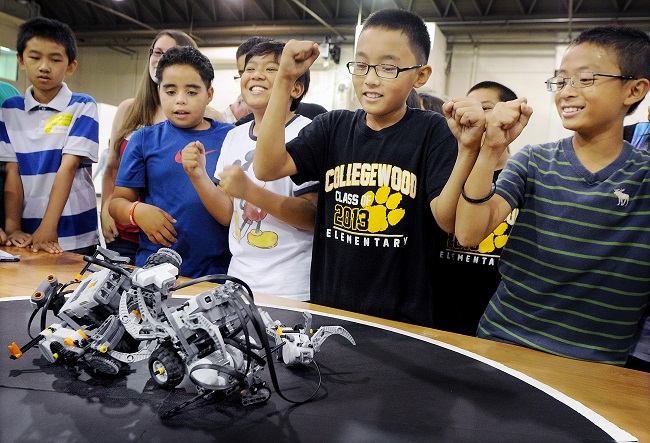 Collegewood Elementary students cheer on their robot at Robot Expo.

The Walnut students were real fireballs and the Pomona kids weren’t far behind in the Robot Expo at the Fairplex on Monday morning. The fun competition is part of Cal Poly Pomona’s School Robotics Initiative.

In fact, Team Fireball from Suzanne Middle School won the gold medal in the Gate Crasher contest with an amazing time of 6.967. In the close competition, students have to program their robots to pass through a gate in 7 seconds.

Easier said then done, when the students have to calculate the circumference of their robot’s wheels, estimate the gear ratio they should use and program the power running through the little electric motors.

But the Fireball team seemed to have mastered the engineering challenge. Team captain Augustus Rodriguez worked with classmates Adel Nasir and Abdul Rahman Ali to build the winning robot.

“I built our robot, while Adel programmed it,” said 12-year-old Abdul. “It was interesting to work with robots in school.”

The little machines force the students to focus on science and math.

“The students have to apply their math and science skills to build their robots, which motivates them to do better in school,” explained Nicole Forrest Boggs, director of development for the College of Education at Cal Poly Pomona.

Since 2006, the university has worked with elementary and middle school students in the two districts to develop an innovative robotics curriculum.

The Associated Student Inc. organization at California State Poly Pomona has proposed building a $90 million state-of-the-art campus Recreation Center. The center, if approved, will increase student fees by $149 per quarter in 2012 when the center opens.

After interviewing students on campus I found that there is a core group of students who are in favor of the proposal as well as a group who are opposed. Those in favor are about building a legacy and creating more opportunities for future students on campus.

Students who are opposed see the recreation center as too much money and that students and the university should be addressing other pressing needs such as possible cuts to Cal State schools by the governor’s proposed state budget.

Stay tuned for my article due out later this week and the student vote that will take place March 5 and 6.