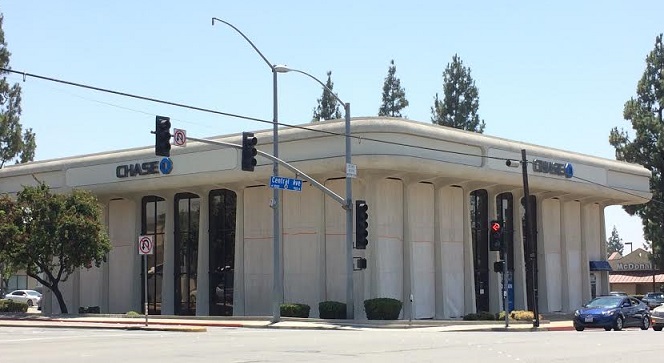 Perhaps the bank at Central Avenue and Moreno Street in Montclair isn’t truly a good example for my Mod! category of midcentury modern architecture, as the building, originally an American Savings, was built in 1973. Then again, as names go, Mod! is somewhat elastic, and the bank, across from Montclair Plaza and near the 10, always catches my eye.

I’d never heard of American Savings, and I can’t find any information about it online, but I’m told that like Home Savings Bank, American had a distinctive design that is still immediately recognizable. Like a giant concrete mushroom, the building appears to rise from the earth fully formed, including a cap that hangs over on all four sides.

A few months after the Upland Earthquake of March 1, 1990, damaged travertine panels on the exterior were removed, according to the city’s planning department.

American was converted to Washington Mutual in 1998 and to Chase Bank in 2009.

I drove by one night last week and, stopped at a light, was struck by the floor to ceiling windows, which blend in with the building during daylight hours.

Have you seen the building? Did you or do you bank there? 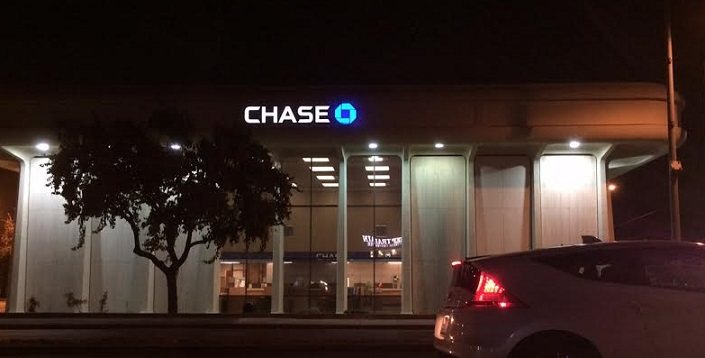