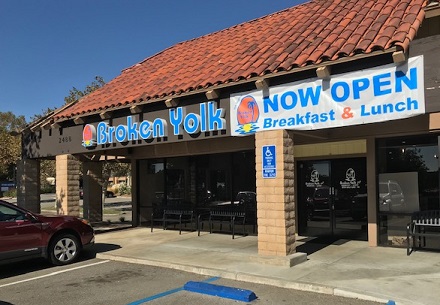 A San Diego-based chain, Broken Yolk opened up in La Verne in October in the Target center. I’d never heard of it — Broken Yolk, not Target — but decided to give it a spin recently, meeting a friend for lunch.

It’s breakfast and lunch (and weekend brunch) only at the Yolk, a mid-sized coffee shop. Apparently weekend crowds are intense, but for a weekday lunch, seating was no problem.

The chain is known for big portions, like four-egg omelets and large pancakes, as well as French toast made with Hawaiian bread. The menu can be seen here.

My friend got breakfast: the Ranchero skillet ($12.45), with chorizo, serrano peppers, two (not four) eggs, avocado and potatoes. He liked it. “It’s breakfast,” he said matter-of-factly. “It can be messed up, but they didn’t.” 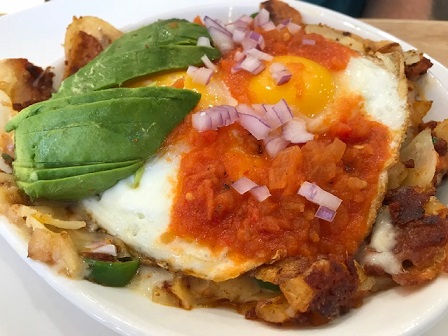 I got lunch: a tuna melt ($12) on sourdough with sweet potato fries. Other side options are fries, onion rings, potato salad and broccoli slaw. (Calorie counts would point to the latter as the healthiest choice at 60 calories, but my choice was second-best at 240. Also, I don’t think I could bear to order broccoli slaw.)

Careful readers of this blog may recall that the tuna melt is my baseline sandwich, the one I’m likeliest to pick at an unfamiliar restaurant if it’s on the menu. This was an above-average version, fresh and with jack cheese. 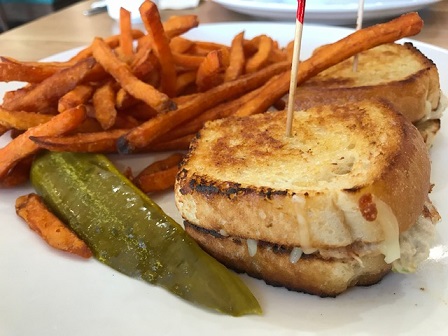 People on Yelp seem inordinately gripey about the wait times for weekend breakfast, making me wonder if they’ve ever gone out for breakfast before. Drive past BC Cafe on a weekend morning and you’ll glimpse one or two dozen would-be patrons scattered out on the lawn waiting for a table inside to open.

Anyway, Broken Yolk’s got a varied menu, service was attentive and the food is pretty good. Despite the name, I’ll bet they will give you an egg sunny side up if you ask. 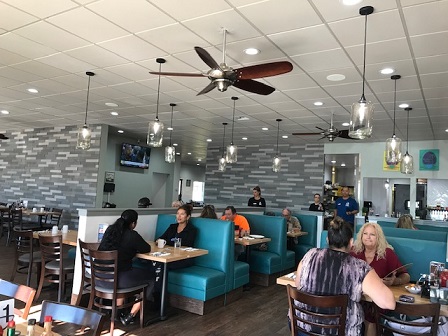