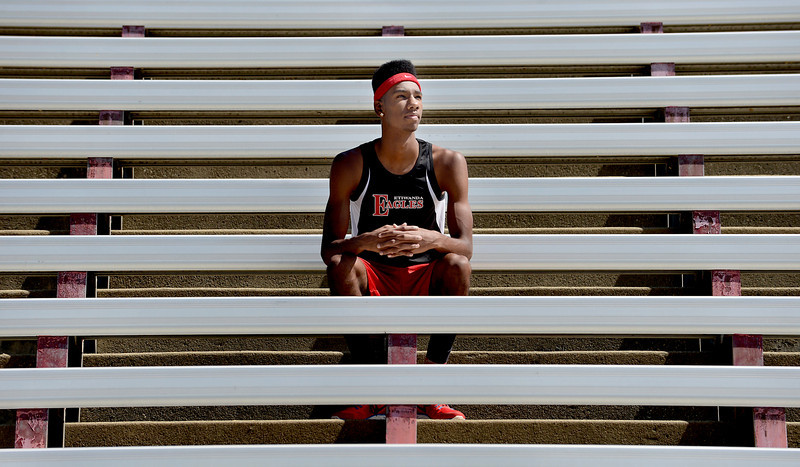 He needed every inch of his towering frame to win the CIF State championship in the 400 meters.

“My coach told me before the race that it was going to be so close I would have to lean at the finish,” Parish said. “I didn’t know for sure I won until the announcer said it.”

At that very moment, it all become worth it. All the excruciating ladders, the weight lifting, the monotonous training.

It was the kick that Parish developed last summer that was his greatest weapon, one he unleashed like never before on June 1. His time of 46.53 at the state finals stands as the third best 400 meter time in the country this season.

The adrenaline was running so high in the 400 state final that the top three times in the state were achieved in that one race. Parish had to close a significant gap over the final 150 meters to edge Eureka’s Alexis Robinson by two hundredths of a second.

“It was a photo finish,” Etiwanda coach Bennie Gooden said. “Miles just out-leaned him at the line. He was behind where he was supposed to be entering the final 150, but he just kicked it into gear.”

Parish isn’t typically alarmed when trailing. After all, he calmly erased a five-meter gap in the final 100 meters to win CIF-SS Masters by two tenths of a second, a lifetime compared to his margin at state.

But he knew the state final wasn’t unfolding according to plan. Against the best competition he had seen all year, he was too far behind entering the final curve. In an event that Gooden calls the thinking man’s race, Parish hadn’t executed properly to that point

“The top of the last 150 has been my weakest point,” Parish said. “My coaches would make me run a full 400 and start my teammates at the last 150 mark and let them run full speed from there. At the state final, I just found another gear and at the finish all I could do was hope it was enough.”

Once the euphoria wore off after winning his first state championship in his first trip to the state meet, Parish had another realization. The senior signed a letter of intent with Arizona for 85 percent of a scholarship. The Wildcats, however, made him a deal. The faster he ran throughout the season, the closer he would get to a full scholarship.

True to their word, Arizona drew up a new letter of intent for Parish after the state meet. With a time like the one he posted, nothing less than a full scholarship would have been fair.

“This whole season turned out better than I could have possibly imagined,” Parish said. “They way it all happened, it was just crazy.”

COACH OF THE YEAR: Jackie Robinson, Los Osos
Simply making it out of the Baseline League is no small feat. Robinson’s boys team, however, graduated track athletes in 14 events to CIF-SS Preliminaries, where Los Osos finished third in the team standings, 3.5 points behind Temecula Great Oak and 12 points behind Division 1 champion Vista Murrieta.

Robinson helped pole vaulter Kyle Beck reach the CIF state meet and achieve the 15th best mark in the state this season with an effort of 15 feet, 9 inches. Los Osos jumper William Solomon advanced to CIF-SS Masters in two events, won the CIF-SS Division 1 triple jump title and finished second in the long jump. The junior’s effort of 23 feet, 11 3/4 inches stands as the sixth-best long jump mark in the state this season.

Sophomore Tomi Adegoke posted the 23rd best long jump in the CIF-SS this year and senior Aaron Thompson posted a 17th-place finish at CIF-SS preliminaries to aid a strong team effort this season for a perennially tough Los Osos program.

FIRST TEAM
KYLE BECK, Los Osos, Senior
The senior boasts the 15th best mark in the state this season having cleared 15 feet, 9 inches at the Arcadia Invitational. He tied for 13th at the CIF State meet with a height of 15 feet, finished eighth at the CIF-SS Masters meet and tied for second in CIF-SS Division 1.

VICTOR BOLDEN, Los Osos, Senior
The Oregon-State bound Bolden, who will run track and play football in college, made his second state final in the 300 hurdles but committed a false start to end his season. The CIF-SS Division 1 champion placed second at the Masters meet and won his State preliminary in 37.56 seconds.

DILLON GROENER, Chino Hills, Senior
The top pole vaulter in the Inland Valley tied for with one other for sixth at the CIF State meet by clearing 15 feet, 10 inches, his top mark of the season. Groener tied for second at the CIF-SS Masters meet at 15-10 and tied for fourth at CIF-SS Division 1 finals.

MICHAEL RAMIREZ, Rancho Cucamonga, Senior
He was a CIF State qualifier in the 800 meters, finishing sixth at the CIF-SS Masters Meet with a time of 1 minute, 54.76 seconds. He didn’t make it to state finals, but his Masters time was the 18th-best mark in the CIF-SS this season.

MYLES VALENTINE, Upland, Sophomore
In his first year running track, the sophomore burst on the scene by finishing second at the CIF State meet in both the 100 and 200. Valentine’s top 100 time was a 10.33-second wind-aided effort at Masters, his top 200 time a 21.05-second race at CIF Division 1 Prelims.

ANTONIO WOODARD, Upland, Sophomore
The sophomore finished ninth in the 400 at the CIF-SS Masters meet, clocking a time of 50.69 seconds. He placed fourth at CIF-SS Division 1 finals with a 49.20-second effort and he was a member of the CIF champion 400-meter relay team that clocked a time of 41.6 seconds.