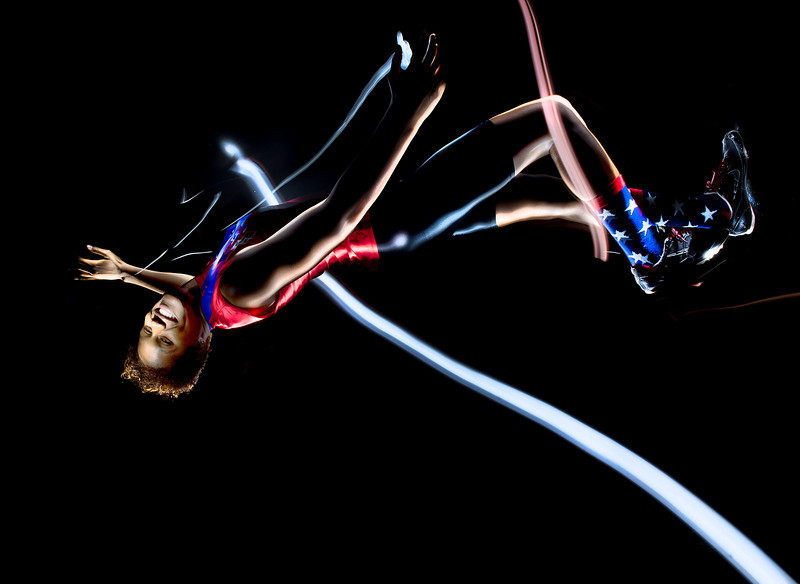 She was academically ineligible for track her junior year, which was “definitely a wake-up call. I hated it. I could only blame myself.”

Her athletic endeavors were focused on basketball, so when she returned to the high jump her senior year, there was rust.

“She said, ‘you did it your sophomore year. … If you don’t do it this year, you’ll wonder if you could’ve done it,’” McCoy said.

Soon after, she jumped 5’10” in practice, then a little while later, she did it in a Citrus Belt League meet, and was feeling pretty good.

“My dad called me one night after the Mt. SAC Relays, and he told me, ‘this girl just jumped six feet.’ I said, ‘why did you have to tell me that?”

Then she got a new goal.

So she has to settle for the No. 2 mark in the nation this year and the No. 1 mark ever in San Bernardino County. McCoy is a bit unconventional among high jumpers in that she uses running spikes instead of high jump spikes and she doesn’t put a tape mark down on where to start her run. But clearly, it works. Now, she’s going to LIU for basketball and wants to find a way to do the high jump, too.

“I need to talk to my basketball coach, and the track coach,” she said.

The track world is hoping they listen.

COACH OF THE YEAR: Jaime Sandoval, Colony
Sandoval capped a spectacular season by leading the Titans to a CIF-SS Division 2 team championship by a four-point margin over second-place Redondo Union at CIF-SS finals on May 18.
The monumental occurrence was a testament to the balance across a Colony program that is routinely one of the best in the Inland Valley.

The 400-meter relay team that placed first in CIF-SS Division 2 went on to finish fourth in the state. Anchor leg Sarah Dunmore qualified for the CIF-SS Masters meet by finishing second in the 200.

Jazmine Robertson, another member of the relay team, won the CIF championship in the 300 hurdles and Sade Hardin, also a relay team member, finished third in the 100 and 200 at CIF finals. Taylor Eyre placed seventh in the high jump at CIF finals and Sienna Tesimale sixth in the shot put.

FIRST TEAM
BRITTANY BROWN, Claremont, Senior
Finished second at the CIF State meet in both the 100 and the 200 to Long Beach Poly’s Ariana Washington. The CIF-SS Division 2 100- and 200-meter champion’s top 100 time this season was 11.59 seconds at CIF Prelims and top 200 time was 23.78 seconds at CIF State.

MARGUERITE CROKEM, Chino, Sophomore
Just a sophomore, the pole vaulter qualified for the CIF-SS Masters meet by finishing second at CIF-SS Division 2 finals by clearing 11 feet, the fifth-highest mark all season in Division 2. She cleared 10’3” at Masters, where she placed 12th.

SKYLER DANIEL, Upland, Sophomore
Although overshadowed by Rachel McCoy among area high jumpers, Daniel finished fifth in state, clearing 5 feet, 6 inches. She cleared 5’5” at Masters for a sixth=place finish. She was also third in Division 1 and had a season-best jump of 5’8” at Baseline League finals.

SARAH DUNMORE, Colony, Senior
The anchor for the 400-meter relay team that finished fourth at the CIF State meet finished second in the 200 at CIF-SS Division 2 finals and helped the Colony girls to a team CIF championship. She placed seventh at Masters in the 200 with a time of 24.05 seconds.

KIRA MORELAND, Los Osos, Senior
The Arizona State-bound senior placed second at the CIF State meet and third in the CIF-SS Masters meet. Her season-best long jump of 20 feet, 7 inches stands as the second-best mark in the state this season. She long jumped 20’ 1 1/2 at state and 20’ 2 1/4’ at Masters.

JORDIE MUNFORD, Rancho Cucamonga, Senior
The Oregon signee battled back from a hamstring injury that shelved her the first half of the season to finish ninth at the CIF State meet in the 300 hurdles. Her 42.07-second effort at state prelims stands as the third-best mark in the state this season.

DESTINY PARKER, Summit, Junior
She was strong in both throwing events, especially the shot. She finished fifth in the state in the shot with a mark of 45 feet, 2 1/2 inches, her best mark of the year and No. 8 in CIF-SS. She finished sixth in CIF-SS at 43’9 3/4″ and had a season-best of 116’5” in the discus.

NIKKI WHEATLEY, Bonita, Junior
Already with a plethora of scholarship offers to play basketball, Wheatley qualified for the CIF state meet in the triple jump with a fifth-place finish at CIF-SS Masters. Her season-best mark of 39 feet, 1 3/4 inches stands as the 12th best effort in the state all year.