Skip to primary content
Day 2 Write ups
Claremont 2, San Gorgonio 0 >> The Spartans (7-3-2) were shutout by the Wolfpack (7-3-1) in the semifinals of the San Gorgonio Tournament.
Patriot 1, Redlands 0 >> Goalkeeper Quentin Gray had three saves in the first half for the Terriers in the San Gorgonio Tournament loss against the Warriors. Grant Ganther had two saves as the Terriers’ goalkeeper in the second half.
Redlands 1 (5), Arroyo Valley 1 (4) >> Adrian Rominu scored the lone goal for the Terriers (3-8-2) in regulation. The Terriers advanced after penalty kicks against the Hawks. Redlands will play at 9 a.m. today against an opponent yet to be determined in tournament play.
San Gorgonio 2, Colony 0 >> Victor Valadez and Abraham Martinez scored a goal for the Spartans in the victory over the Titans (4-0-1) in the quarterfinals of the San Gorgonio Tournament. Goalkeeper Sergio Lopez had four saves in the win.
Schedule for Finals: 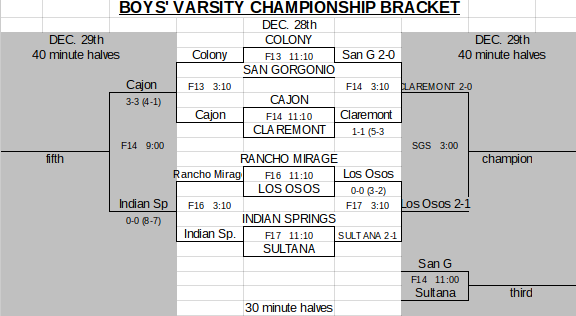