Redlands East Valley baseball coach James Cordes is writing a diary for the Redlands Daily Facts about his experiences about coaching in the Cape Cod League this summer. While much of his column is about his Cape Cod experience, I wanted to publish what Cordes wrote about Ed.

From James Cordes: “I also wanted to take a moment to reflect on Ed Castro, having lost him last week. I worked with Ed for the past four years, always pleased when he was able to cover our games or write a feature on the Wildcats. He was a rare find these days – an on-the-job sports journalist doing his best to cover a demanding city with as much equity and responsibility as possible. 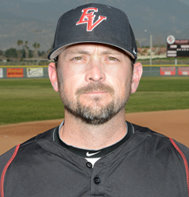 My father is a man of the same cut – he has been a sports editor and reporter for 40 years in Sun Valley, Idaho. Each spring when he and my mother visit, my father would always go out of his way to stop into the Daily Facts office and say hello to Ed. They seemed to have a mutual respect for each other, making their way in a seemingly thankless job.
I wish the print journalism industry wasn’t racing towards extinction as quickly as it is. But, with men such as we had with Ed, it continues to hang on and maintain relevance.
Rest in peace, Ed. You will be missed.”

I really enjoyed working with Ed Castro (who passed away Tuesday night) during his time at the Daily Facts. Since the Sun and Daily Fats both cover Redlands and we’re the same company, we’d trade information, coordinate coverage and sometimes even be at the same events. That included several REV football games last year.

It also included the Arrowhead Christian championship game and we shared a motel room in Nipomo. That one didn’t end too well. I was leaving early on Sunday morning, while Ed was going to stay in the area to watch football with some friends. He awoke on Sunday to find me, about ready to leave, and a maintenance person mopping up after I flooded the bathroom (don’t ask). Ed would only give me a hard time about it when I brought it up. But he was a good guy who didn’t seem bothered.
Ed was a good guy who worked hard, cared about sports in Redlands had a great sense of humor and was very humble. He could be a bit insecure, because while he covered the day-to-day events in Redlands, I would come in and cover the bigger events, and he would refer to me, with perhaps a bit of sarcasm as “The A Team.” Ed, you were the real A team.
Here are some memories of Ed

First, Ed’s greatest “hit.” He took this video at the opening of an ACA football game and stood in there until he got the shot. The video went viral.

Click below, to read tweets from the Redlands community about Ed’s passing.
END_OF_DOCUMENT_TOKEN_TO_BE_REPLACED