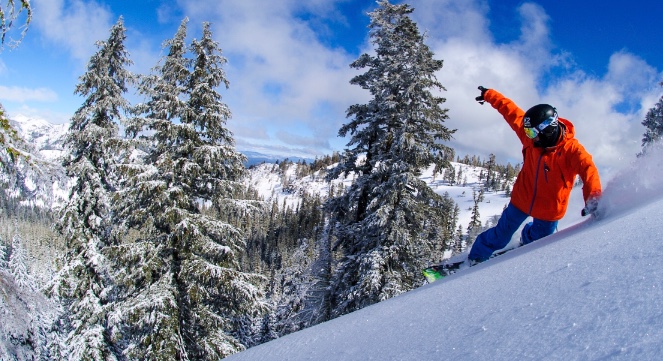 A planned gondola would cut the travel time between Alpine Meadows and Squaw Valley for skiers and snowboarders, along with reducing the amount of vehicle traffic between the two resorts. (Photo courtesy Alpine Meadows)

It’s been talked about for years, and now solid plans have been announced to build a 3,000-foot-long gondola linking Squaw Valley and Alpine Meadows ski resorts, thus producing what would be the largest ski complex in California with more than 6,000 skiable acres.

KSL Capital Partners., which owns both resorts, is optimistic that it can get the gondola up and running for the 2019-20 ski season pending environmental approvals from county, state and federal agencies. It must also survive possible court challenges from environmental organizations.

The gondola, which would connect the base areas of both resorts, would be named the California Express. The two resorts’ many lifts would take skiers and snowboarders to some 270 marked runs plus the famed open bowls at Squaw and Alpine.

A steep ridge separates the two resorts. About 30 years ago, a local skier and developer – Troy Caldwell – bought a 460-acre parcel of land on the ridge that abuts both resorts.

Caldwell and the two resorts have an agreement under which the gondola would be allowed the cross that private land thus making the linkage possible.

Land that the gondola would sail over is right next to the Granite Chief Wilderness. Sierra Watch, a nonprofit that opposes over-development in North Lake Tahoe, maintains that the project would threaten the value of the wilderness zone.

There are a number of small lakes in the area that are very popular with hikers. Squaw and Alpine note that there are no plans to operate the gondola in the summer and thus lessen the wilderness experience for the hikers.

Eli Ilano, forest supervisor for the Tahoe National Forest, then enters the picture with this update that was provided to the Sacramento Bee. “We’re in the middle of preparing our draft of the environmental impact statement, which we anticipate coming out late this winter or early spring. Depending on comments and appeals, we have the potential to make a decision at some point during 2018 or 2019.”

Right now, it can take 20 to 40 minutes – depending on conditions – to drive from one resort to the other. Andy Wirth, president and COO of Squaw Valley Alpine Meadows, noted that the gondola would reduce car and shuttle traffic between the two resorts.

And no access roads would be needed to cut through the woods as gondola builders would use helicopters and overland crews for construction.

A resort spokeswomen said the cost of the project has not been determined yet as currently “multiple alternatives are being studied.”

Some locals, who happily frequent both resorts, have started calling the new venture “Squawlpine.”