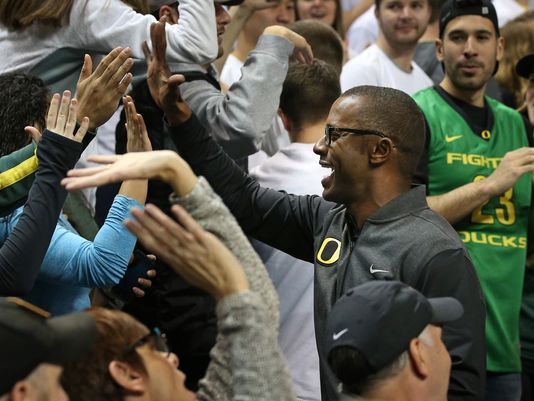 Willie Taggart is the first Oregon head coach hired from outside the program since 1976. The transition was a tough one.

In the first three months of the former South Florida head coach’s Oregon tenure, one of his new assistants resigned, another jumped ship for a different Pac-12 school and a strength coach was suspended after several players were hospitalized after intense offseason workouts.

When spring practice finally opened April, Taggart started the process of resurrecting the Ducks (4-8, 2-7 Pac-12 last year) after the team’s sudden fall from grace. In remaking a program only three years removed from a College Football Playoff berth, the 40-year-old head coach and his staff quickly gained the trust of his players.

— Reunion: Wide receivers coach Jimmie Dougherty had a seven-week tenure at Oregon before following Jedd Fisch to UCLA. The timing of Dougherty’s sudden departure was awkward as it came just seven days after National Signing Day, when he helped the Ducks ink four wide receivers. He was the second Oregon assistant coach hired under Taggart to leave this offseason as former co-offensive coordinator David Reeves was forced to resign following a DUI arrest.

— End in sight?: With Oregon looking vulnerable in its first year under Taggart, UCLA has a prime chance to snap its six-game losing streak to the Ducks, the longest drought for the Bruins in the series. UCLA’s last win over Oregon came in 2007, a 16-0 victory in the Rose Bowl, and the teams haven’t met since 2014.

— Defensive reform: Oregon’s defense was 126th in the country in points allowed (41.4) and yards allowed (518.4) last year. The Ducks threw a four-year, $4.6 million contract at Jim Leavitt and lured the defensive coordinator from Colorado to fix the Ducks’ woes. He favors a 3-4 scheme, replacing former Oregon defensive coordinator Brady Hoke’s 4-3, and found success against UCLA last year with the Buffaloes. The Bruins scored only 10 points against Colorado last year, tying their season-low.

— QB Justin Herbert: Herbert flashed great potential as a true freshman after he took over the starting role six weeks into the season. He set school records for touchdown passes in a game (six) and total offensive yards (512) while tying the mark for single-game passing yards (489). In seven starts, the Eugene native had 1,866 passing yards with 19 touchdowns while completing 64 percent of his passes.

— RB Royce Freeman: Taggart’s first major victory during his Oregon tenure was convincing Freeman to return for his senior season. The running back was hampered by injuries last year, but still led the team with 945 rushing yards and nine touchdowns in 11 games. As a sophomore, he ran for 1,836 yards, which broke the Oregon single-season rushing record.

— LB Troy Dye: Levitt inherited a defense in shambles, but has a solid, young player in Dye. The linebacker led the team in tackles last year as a freshman with 91. Levitt plans to move Dye to inside linebacker in the new 3-4 scheme.

Oregon in a GIF