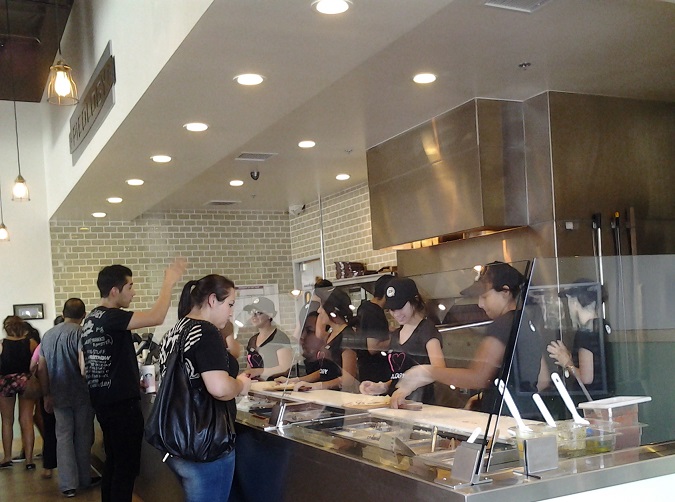 The Inland Valley’s first fast-fired pizza parlor, Pieology, opened last week south of Victoria Gardens in the Sears Grand center below Foothill Boulevard. The Fullerton-based chain is expanding quickly; with 10 locations open as I write this, including Walnut; one is due to open in Chino on Sept. 11 at 3908 Grand Ave.

I had lunch there Wednesday. This was my first Pieology visit, but I’d eaten at Blaze in Pasadena and 800 Degrees in Westwood, which have similar concepts. You line up like at Chipotle or Subway and your pizza is assembled in front of you by a line of workers to your specifications (within reason). They pop it in the oven, you pay, get your drink and sit down, and within a couple of minutes they’re bringing out your pizza.

There are pre-selected combinations you can order, or you can customize. I customized, going with the standard marinara and mozzarella with sausage and mushrooms ($7.50). (Disappointingly, if understandably, anchovies aren’t offered.) Because I’m soft-spoken, ordering involved my repeating most of these items to the staff on the other side of the sneeze shield. Also, I looked away at one point after answering the question “is that all?”, and when I looked back, “yes” had translated into ham being added. Well, all toppings seem to be free, so I let it go. As a friend put it, without some restraint you can end up with a pizza resembling a bas-relief map of the Sierra Nevadas.

I also picked up a prepackaged salad of spinach, cranberries, bleu cheese and walnuts ($3.50), which I liked. The pizza is very thin crust, crisp and almost cracker-like, with some char. The toppings were less generous than your typical pizza parlor.

Pieology was very much like Blaze (I think I had essentially the same salad both places), but less foodie than 800 Degrees and its Neopolitan-style pies and menu. I can see the appeal: You can get a decent pizza quickly on a lunch or dinner break, and it’s all yours; in a group, everyone can get exactly what they want without compromising and having to accept, say, black olives or another objectionable topping. Vegetarians can do their own thing.

Purely for taste, it’s not great pizza, but it’s all right, and the whole thing is kind of fun. I mean, Chipotle doesn’t make the best burritos either, but that doesn’t mean you don’t want to go there anyway once in a while. 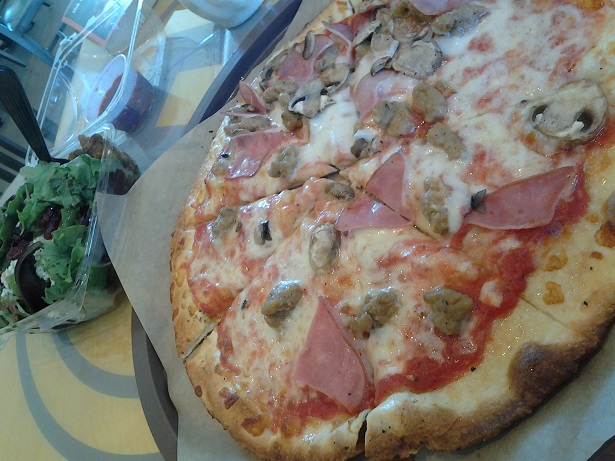 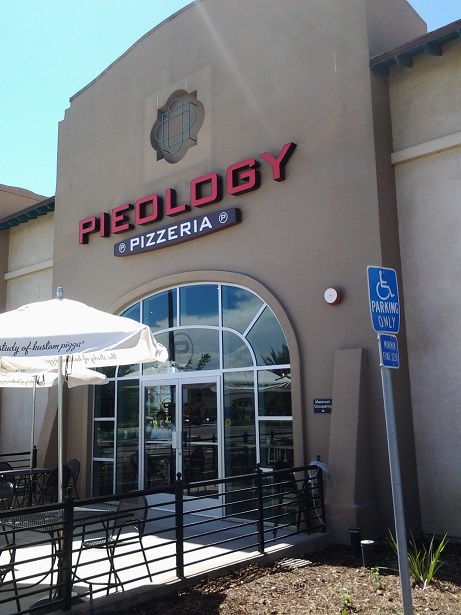