A Dodgers spokesperson said that Hall of Fame manager Tommy Lasorda is “doing fine” after spending about a week in the hospital with back and shoulder issues. Lasorda could be released from the hospital as early as tomorrow, according to the club.

Lasorda, 89, has not attended either Game 3 or 4 of the National League Division Series at Dodger Stadium.

In his Hall of Fame induction speech Sunday, former Dodgers catcher Mike Piazza said he “will always be truly grateful” to the organization that drafted him and employed him from 1988 to 1998.

Lasorda sat in attendance with the other Hall of Famers as Piazza rattled off some fond memories of his first manager:

“You always sent me baseball equipment when I needed it,” Piazza said, “you convinced the Dodgers to draft me, you gave me big league at-bats in spring training when I was a big wide-eyed kid out of junior college, you went to bat for me when I walked away from the game, you convinced the Dodgers to let a very popular catcher in Mike Scioscia go so that a veteran pitching staff would know I was their catcher my rookie year.”

A local World War II veteran wanted to meet Tommy Lasorda before he died. Clifford Rich, 90, crossed the item off his bucket list recently when Lasorda called to chat; he died the following day.

Here is the touching story from colleague Dennis McCarthy. 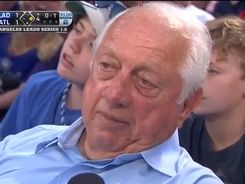 Former Dodgers manager Tommy Lasorda tends to speak his mind with a microphone in his face.

Tommy Lasorda doesn’t have an MVP vote. If he did, the former Dodgers manager — and former pitcher — wouldn’t vote for Clayton Kershaw.

Considering his effervescent love for all things Dodgers, it was a surprising sentiment from the 87-year-old Hall of Famer.

The question arose Monday when Todd Hollandsworth — who won the NL Rookie of the Year award in 1996, when he played for Lasorda — was interviewing Lasorda for MLB Network Radio on SiriusXM.

“We know how obviously talented [Kershaw] is but there’s a debate that still exists,” Hollandsworth said. “Do you think a pitcher like Clayton Kershaw, of his ability, should win the MVP Award? Should he be considered for the MVP or just the Cy Young?”

The MVP award winners from both leagues will be announced Thursday.

Remember the man wearing a Dodgers hat who rescued an older man from a burning building in Fresno recently? Sure you do.

That man, Tom Artiaga, was a guest on “Jimmy Kimmel Live” yesterday. So was Tommy Lasorda. Here’s what happened: